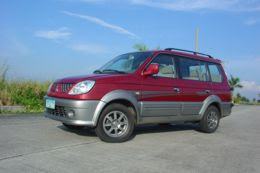 The wonder of an effective marketing campaign is that it sticks right in your head, whether you like it or not.  And while Vinchie and the rest of the Parokya ni Edgar strut their stuff, kissing and rapping their way to the beach, I can’t help but imagine a similar scenario climbing onboard the 2004 Mitsubishi Adventure.  While I have no intension of kissing a fellow man, I do have every intension to test this heavily revised AUV in a field it does best: ferrying people.  When the need of carrying 7 people to the Car of the Year Awards – Philippines test venue was raised, guess which one was the vehicle of choice: the Mitsubishi Adventure.