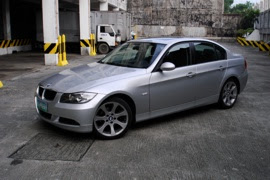 There’s always something just right about the BMW 3 Series.  Beside the papa bear excess of the 7 Series and the mommy bear conservatism of the 5 Series, the 3 has always balanced the act quite well.  And buyers seem to agree: the 3 Series accounts for more than 50 percent of BMW’s annual sales.  BMW considers the 3 Series so important that it has as much trim choices as the rest of the sedan line-up combined.  Locally, there are at least six—ranging from the poverty spec 318i to the ultra-cool 325i.  With so many choices, which is the best?  Although the obvious is the 325i, the price of ownership stings the wallet a tad too much.  On the other end of the scale, as tempting as the 318i is, it’s just too entry-level.  And then there’s the 320i, but everyone seems to have one of those now.  So, it’s the new 320d then.  Though it may not have that famed inline-6 upfront, it’s offers an excellent mix of style and performance in every sense of the word.