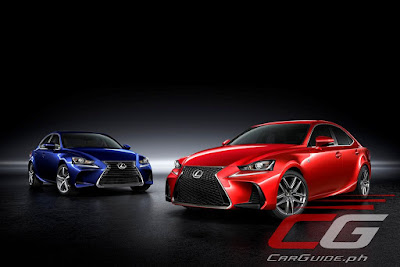 The Lexus IS has been a game-changer in all sorts of ways for Lexus Manila. Responsible for the brand’s continuously robust growth, the third-generation IS has found its way to 442 garages in the Philippines since its market introduction in 2013. This year, the “Intelligent Sport” sedan sees a round of enhancements, both aesthetically and mechanically, to keep its segment leader status in power, prestige, and of course, in the Lexus mindset, perfection.

The 2017 Lexus IS sees a new front fascia that’s more prominent and aggressive than ever before. The headlights, bumpers, and grille are all new. The headlights are now more pronounced, extending forward, punctuated by the bigger spindle grille that’s punctuated by the L-shaped daytime running lights. As always, the sportier F-Sport model adds an exclusive touch thanks to the three-dimensional F-mesh pattern (the regular IS gets horizontal slats) with a jet-black metallic coating. This grille is integrated with functional brake ducts that improve the Lexus IS F-Sport’s aerodynamic performance. Though the Lexus IS keeps its 17-inch alloy wheel size, new patterns add a feel of constant motion while the triple-layered LED tail lights offer an unmistakable glow at night.

Inside, the Lexus IS sees improvements to its well-equipped cabin. The center-mounted infotainment display is now larger (7 to 10.3 inches) while new stitching on the instrument cluster as well as knee bolsters enhances the sporty mood of the cabin. The instrument cluster itself has been changed along with new, larger cup holders, and a bigger leather-wrapped palm rest. The Remote Touch Interface or RTI has also been added to the Lexus IS providing ease of use to the robust infotainment system.

Like its exterior color palette, the 2017 Lexus IS is available in no less than four interior colors. The standard all-black interior is there along with the F-Sport exclusive Dark Rose.  The IS meanwhile gets Topaz Brown. A new shade dubbed Chateau has replaced Moonstone and Ivory. This lighter shade melds the elegance of ivory with a contemporary light-gray tincture.

Mechanically, both the Lexus IS350 and IS350 F-Sport are powered by the venerable normally-aspirated 3.5-liter V6 engine generating some 317 horsepower at 6,400 rpm and 378 Nm of torque at 4,800 rpm. Mated to an 8-speed automatic transmission with sequential shift, this makes the Lexus IS the most powerful premium compact sedan in standard form. 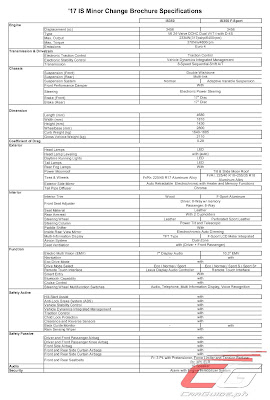