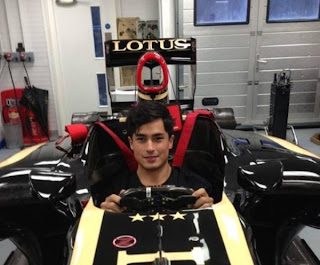 On May 4 to 5, the streets of Manila will bear witness to some never-before-seen motor action.

Filipino-Swiss racer Marlon Stockinger will sit behind the wheel of the famed Lotus Formula 1 car and give Filipino fans a much-anticipated demo at the first ever Manila Speedshow. The event opens on May 4 at the Quirino Grandstand, the starting line for the F1 car demo, and will conclude on May 5 at the Mall of Asia Atrium with an adrenaline-pumped exhibition.

The event, presented by Globe Tattoo, will also feature luxury car displays. Fans and racing enthusiasts will also get the chance to live the F1 life for a day with the Pit Stop Competition. It will celebrate the emergence of Filipino talent in the global motoring world—led, of course, by 22-year-old Stockinger, handpicked by the Lotus F1 Team to be part of a group of seven elite junior drivers to train and compete in the sport.

“Motorsport can be very daunting for young drivers, particularly everything that occurs away from the track,” said Lotus F1 Team Principal Eric Boullier. “We hope to give our drivers the very best preparation possible for their future careers.”

Stockinger has been making waves in the racing world since he first entered Karting competitions in Europe as a teenager. This April, he made his debut at the prestigious 2013 World Series by Renault. The series is the gateway for gifted drivers aspiring to take their place in the F1 world. 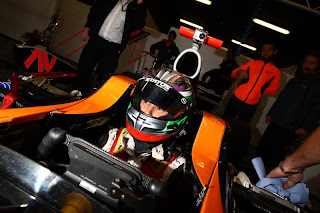 Shortly after the Manila Speed Show, Stockinger will return to Europe to resume the Formula Renault 3.5 series campaign in Monte Carlo, with several races all over Europe until the season ends in October.

The Lotus F1 Team, formerly Renault, first began racing under the Lotus banner in the 2012 F1 season, where it placed Fourth in the Constructors’ Championship. Its F1 history dates back to the early ‘80s. Racing legend Michael Schumacher won the Drivers’ Championship under the team in 1994 and 1995, while Fernando Alonso did likewise in 2005 and 2006. The team bagged the top Constructors’ honors in both 1995 and 2006.

With decades-long history and F1 expertise being made available to him, Stockinger is indeed getting the best training in the world—and it will be no surprise if he soon puts the country on the global motorsport map.