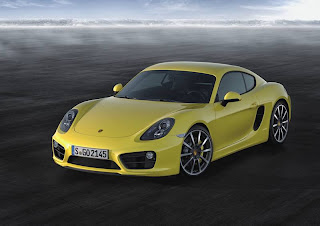 In an exclusive event attended by Porsche owners and guests held in Alabang, the new Porsche Cayman was unveiled during its official launching in the Philippines last May 18, 2013.

The third generation of the Cayman has been completely redeveloped. It is lower and longer, lighter and faster, more efficient and more powerful than ever. A longer wheel-base, wider track and larger wheels enhance the driving performance of the mid-engine sports car to a level without equal in its competitive class. The new two-seater is – after the 911 Carrera and Boxster – the third sports car model line from Porsche to feature innovative lightweight body design. The new Cayman is up to 30 kg lighter, depending on the specific model and equipment, and it consumes up to 15 per cent less fuel per 100 km than the previous model – despite higher engine and driving performance.

The new generation of the two-seat mid-engine sports car is debuting in two classic Porsche versions: the Cayman and the Cayman S. The base model is powered by a 2.7-liter flat six-cylinder engine with 275 hp (202 kW). It accelerates from zero to 100 km/h in 5.4 seconds, depending on the equipment, and reaches a top speed of 266 km/h. Its NEDC fuel consumption lies between 12.20km/liter and 12.98  km/ liter, depending on the selected transmission.

The 3.4-liter engine of the Cayman S produces 325 hp (239 kW); the best possible ac-celeration from a standstill to 100 km/h is 4.7 seconds with appropriate features. The Cayman S can reach a top speed of 283 km/h, and its NEDC fuel consumption value lies between 11.36 km/liter and 12.5 km/liter, depending on the selected transmission.

Both sport coupés are equipped with standard manual six-speed transmission. The sev-en-speed Porsche Doppelkupplungsgetriebe (PDK) can be delivered as an option; it enables faster acceleration and better fuel economy.

Porsche is also upgrading the Cayman with new optional features. For example, the sport coupé is now available with Adaptive Cruise Control (ACC) for the first time, which controls the distance to the car ahead in traffic and vehicle speed, as well as a specially developed Burmester sound system. Another new feature for the Cayman is the keyless Entry & Drive system, which is available as an option.

The new Cayman is more distinctive than ever. Its proportions are new, and yet it is clearly a Porsche sport coupé; an extended wheelbase with shorter overhangs and 18- and 19-inch diameter wheels with larger rolling circumference are identifying visual characteristics of the car’s more enhanced driving performance. Its styling is marked by precise lines and razor-sharp sculpted edges. They emphasise the car’s low, extended silhouette with the windscreen shifted forward and the roof line that reaches far back. Especially expressive and characteristic are the dynamic recesses in the doors, which guide induction air into the distinctive air scoops on the rear side panels and then di-rectly to the engine. This offers the most prominent visualisation of the concept of a mid-engine car.

From the front end, the new Cayman is marked by its dominant cooling air inlets, which increase in size towards the sides of the car. Just as unique to the new generation of the sport coupé are the large, low rear lid made of aluminium and the rear section with its wrap-around edges. Mounted directly to the rear lid is the thin blade of the rear spoiler, which – in contrast to that of the Boxster – is higher and deploys at a steeper angle. The overall appearance of the Cayman is more independent than before, and it is well-differentiated from the previous model.

For information on the new Cayman and other available models, visit Porsche Center Philippines at 201 EDSA Mandaluyong City or contact  7270381 to 85.
at 7:30 AM