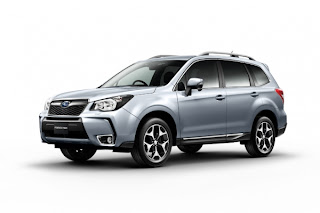 Fuji Heavy Industries Ltd. (FHI), the manufacturer of Subaru automobiles, is pleased to introduce the announcement made by Subaru of America, Inc. that the Insurance Institute of Highway Safety (IIHS; a nonprofit organization supported by auto insurers in the US) has awarded the best possible ranking of  2013 TOP SAFETY PICK + (TSP+) to the all-new Forester currently sold in the North American region. The Forester earned an overall rating of good in the small overlap test required for winning the TSP+ as the only one of 13 small SUV. This is the third TSP+ award for Subaru vehicles following the last year’s first win of 2013 Legacy and Outback (built after Aug. 2012). The Institute’s 2013 “TSP+” award which requires “good” ratings for occupant protection in at least four of five IIHS evaluations, with no less than “acceptable” in the fifth test.

Subaru has been recognized by IIHS for four consecutive years as the only automotive manufacturer with a Top Safety Pick (TSP) winner in all its lineup models (Subaru Legacy, Subaru Outback, Subaru Forester, Subaru Tribeca, Subaru Impreza, Subaru XV Crosstrek and Subaru BRZ) currently sold in the North American region. TSP is the best evaluation for safety other than TSP+.

On this win, Thomas Doll, president and COO of Subaru of America, Inc. said, “Safety is one of the brand tenets so we are extremely proud to have earned a TSP+ rating for the Forester and a third TSP+ rating for our brand The Forester is the most award winning small SUV. Now we have another designation for this venerable vehicle.”

IIHS provides consumers with vehicle safety information by rating the vehicle’s performance on four passenger protection tests as “good”, “acceptable”, “marginal”, or “poor”. To win Top Safety Pick, a vehicle must have “good” ratings in all four tests of high-speed front and side crash tests, a rollover test, and evaluations of seat/head restraints for protection against neck injuries in rear impacts.

In addition, IIHS introduced the small overlap test in 2012 to further improve occupant protection in frontal crashes. The small overlap test is a demanding crash that replicates what happens when the front corner of a car collides with another vehicle or an object like a tree or utility pole. In the test, 25 percent of a car’s front end on the driver side strikes a 5-foot-tall rigid barrier at 40 mph.

Here is the video of the new IIHS small overlap test results: