UPDATED: There is No Sudden Unintended Acceleration Issue on the Mitsubishi Montero Sport 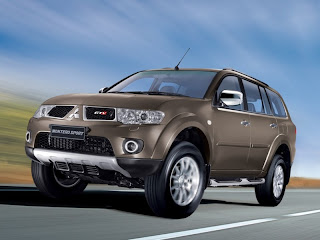 There is no sudden unintended acceleration issue on the second-generation Mitsubishi Montero Sport—that’s the unequivocal statement given at the press conference called by Mitsubishi Motors Philippines Corporation (MMPC). The company had a panel of experts including their own internal product planning and engineering personnel to explain that the Montero Sport has undergone extensive testing, and time and time again, they have reached the same conclusion: there is no design, mechanical, or electronic defect that exists.

MMPC has laid out that there are only four possibilities that can cause the sudden unintended acceleration (SUA) issue. First, it’s because of pedal impediment when an object jams one or more pedals preventing normal operation. Second, pedal misapplication because the driver unconsciously mistakes the accelerator for the brakes. Third, a sticky accelerator where the throttle body gets stuck because of dirt or oil build up. Finally, mechanical or electronic failure where more fuel is fed to the engine than is needed either due to problematic fuel injectors or ECU.

In the first three cases, MMPC notes that any vehicle can suffer from the same sort of problems and is not just limited to the Montero Sport. Meanwhile, in the final case, the problem would exhibit itself every time the vehicle is turned on. And besides, the vehicle will engage a limp or failsafe mode that limits the amount of maximum throttle.

The case of the Montero Sport suffering from SUA is nothing new. This first time this surfaced is in 2011, but then, a panel of technical experts from Mitsubishi Motors Corporation (MMC) flew to the country to conduct a series of tests. They have not found any defects or cause directly linked to the vehicle. In the most recent case made famous because of extensive media coverage, particularly on television and online, MMPC has conducted a thorough inspection of the vehicle after the incident. Their findings: all vehicle data gathered conforms to manufacturer’s standard specifications and that no malfunctions were observed. All hardware is in good condition. They also reiterated that the brake system (including the brake lights) is in good condition and fully operational.

Because there are now more than 80 individuals who have come forward to lodge a complaint about SUA, the Department of Trade and Industry (DTI) has formed a panel to investigate this matter. In due course, all but two has been dismissed. The remaining two are pending final evaluation. Nonetheless, MMPC is fully cooperating with the DTI on this matter and is sharing all its technical findings regarding SUA.

Meanwhile, for the peace of mind of all Mitsubishi Montero Sport owners, MMPC is offering a free check-up at any of their authorized service centers nationwide. There, qualified personnel will be on hand to reorient you on the best and safest way of operating the vehicle. 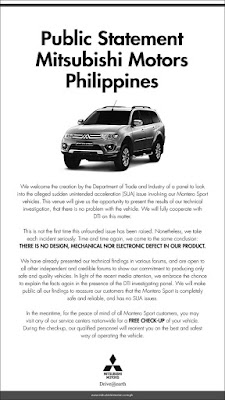