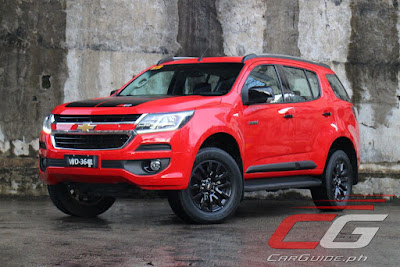 The Trailblazer is a very important vehicle for Chevrolet Philippines. Becoming the main entry point of thousands of Filipinos into the world of the bowtie brand, it accounts for the lion’s share of Chevy’s annual sales. Already boasting some of the segment’s best specifications way back when it was first launched in 2013, Chevrolet could have sat back and relaxed. But its rivals didn’t allow that respite.

In the three years that followed, everyone else from Ford to Toyota presented their own second-generation Pickup-based Passenger Vehicle or PPV. Soon, everyone had something equally sophisticated or something close to what Chevy offered. Knowing they had to protect their corner, Chevrolet had to dig deep and transform their Trailblazer into this: the 2017 Trailblazer Z71. And all things considered, this could very well be the best PPV in the market.

Pricing it at P 1,881,888, the range-topping Trailblazer Z71 easily undercuts its competition by hefty margins: P 107,112 less than the Ford Everest 3.2 Titanium, P 116,112 less than the Montero Sport GT, and P 244,112 less than the Toyota Fortuner 2.8 V. And this time, it’s not just about the bottom line. For this update, Chevrolet has thrown in features that you should care about; features that make all three of its competitors green with envy: Electronic Stability Control with Traction Control, Hill Start Assist, Hill Descent Control, forward collision alert, front and rear parking sensors with backup camera, side blind zone alert, rear cross traffic alert, and tire pressure monitoring system.

Already looking great based on the spec sheets, the Trailblazer Z71 manages to look even better in person. For 2017, Chevrolet has finally moved away from trying to give the Trailblazer some ill-fitting curves (those scallop-shaped headlights definitely had to go). Instead, it has gone angular with a fascia that finally matches this SUV’s tough-as-nails attitude. The squared headlights, larger grille, and angrier looking bumper all contribute to a meaner look while also managing to plant the stance even more. The Z71 trim also adds some playful touches: the matte black hood stripes, high-gloss black side mirrors and door handles, and 18-inch gunmetal wheels. Love it or hate it, it does add character especially when paired with the arresting Pull Me Red paintjob.

As impressive as the new sheet metal is, Chevrolet has done much more than just give the Trailblazer a new front-end. In fact, extensive work has been done to reduce NVH levels by 8 percent through a variety of means from new seals to a 10 percent thicker front glass that necessitates a slight drop whenever the front doors are closed; otherwise because of the curved shape and resulting vacuum, the doors won’t shut. Even without quoting Chevy’s numbers on NVH, the 2017 Trailblazer is noticeably quieter and smoother than ever before. The 2.8-liter Duramax engine isn’t exactly known to be the smoothest or quietest operator out there, but all the ruckus it makes is quelled the moment you step inside. Whether at idle, partial, or full throttle application, everyone can now carry a conversation without worrying that they’ll be drowned out by diesel clatter.

Continuing on the subject of the cabin, extensive work has been done to refine the inside. The 2013-2016 Trailblazer is often criticized for its plasticky interior, sometimes called out as unbefitting of its premium positioning. This year, Chevy has ripped out that entire dashboard and replaced it with something much more respectable. For starters, the fit and finish are clearly better than before, with consistent graining from the dashboard to the door panels and the center console. And then, on the seats themselves, you have contrasting stitching on the black leather, a much better execution than the old beige thrones. Yes, there are still some hard plastic bits here and there, but they’ve been reduced to areas usually untouched by the driver or passengers.

Equally appreciated is the 2017 Trailblazer’s new driving environment. The new gauges may drop the Camaro-inspired dual binnacle, but they’re much easier to read and offer much more information than before. And then, you have the next-generation Chevrolet MyLink infotainment system which is best described as the polar opposite of the disastrous Ford MyTouch. MyLink’s simple interface has crisp graphics, snappy operation, and easy to digest menus which don’t require a read through of the owner’s manual. Although there’s no GPS navigation built in, since it has Apple CarPlay and Android Auto, it can simply mirror the map application on your mobile phone.

Great as those features are, there are some carryover components which could have been improved. For one, the driver’s seat is one movement short (it moves six ways as opposed to eight), preventing you from finding the perfect driving position. Though it’s something you adjust to eventually, the bolstering is the main problem. They’re ample but not good, requiring constant fidgeting just to alleviate back or bum discomfort during long drives. It’s exacerbated by the steering wheel which is good well enough for a proper 9-3 hand position, but a bit too far for easy lock-to-lock operation. Meanwhile, those in the second row will fare much better with generous knee and shoulder room, though it must be said that the seatback itself doesn’t adjust. And despite its generous footprint, the third row isn’t as good as some of its competitors. With a second row that doesn’t slide fore and aft, the available knee room back there is limited to short adults or kids.

While seating comfort is still something to be truly desired, there’s no questioning the improved road manners of the 2017 Trailblazer. The drivetrain may be carried over, but they still produce the segment’s best numbers: 200 horsepower and 500 Nm of torque four years on. More than just being capable of hitting 100 km/h in just 10.4 seconds, there’s excellent tractability at every part of the rev range.  There’s no shortage of power and this boosts confidence during overtaking or merging maneuvers. A slight tap of the throttle is enough to dig you into the driver’s seat. As mentioned previously, the Duramax isn’t exactly the best in terms of quietness or smoothness, but the improved NVH does mean all that clattering is isolated to the outside. The same thing can be said about the carryover 6-speed automatic. Listen carefully, and you’ll sometimes hear the shifts engage roughly, but no amount of shift shock makes it into the passenger compartment; all of it is well mitigated. During a week’s worth of driving, the Trailblazer manages 6.49 km/L at an average speed of 12 km/h.

Despite the large footprint (it’s the widest and tallest in its class), the Trailblazer is surprisingly easy to drive around town. The commanding view of the hood, well-positioned A-pillars, and large side mirrors already make it easy to jostle around traffic, and now add the new Electric Power Steering, and you have an easy to drive, easy to maneuver SUV. Not only does it sometimes belittle its size, but the new steering system reduces judder at higher speeds, contributing to better comfort. And as always, the ride comfort is exemplary on all rows with the rigid fully-boxed frame and Double Wishbone/5-Link suspension returning a solid and stable driving experience. Even the brakes have been tweaked to return a more positive pedal feel and progressive engagement compared to before.

When Chevrolet set out to improve the Trailblazer for 2017, they had one mission: to make sure it meets the demands of increasingly discerning drivers. In that regard, they’ve largely succeeded. The Chevrolet Trailblazer doesn’t need to grab headlines by doing off-road stunts in deserted locations. Instead, it delivered on the terrain that matters the most: the concrete jungle of the city. Chevorlet Philippines’s most important vehicle has become their most convincing yet, boasting of excellent refinement, styling, comfort, and technology. There are still some areas for improvement, but priced and speced as it is, it has become the segment’s best offering.