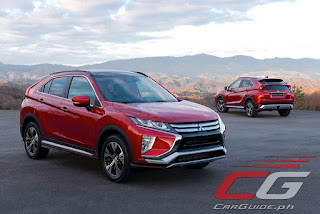 The Mitsubishi Eclipse is back. And no, your eyes aren’t deceiving you; it’s a crossover. Set to debut at the 87th Geneva International Motor Show next week, Mitsubishi is resurrecting the nameplate of its storied coupe, calling it the Eclipse Cross. The Eclipse Cross is a global model that will be sold in Europe first, but will eventually make it to other markets such as Japan, North America, Australia, and other regions.

The Eclipse Cross joins Mitsubishi’s other global crossovers, namely the ASX and Outlander models. It carries Mitsubishi’s signature styling but fused with coupe-like looks and dynamic SUV mobility. The Eclipse Cross is characterized by its wedge-like profile, distinctive beltline, and strong character line. At the back, the rear window is raked forward and together with the sharply cut off tailgate project the image of an athletic vehicle.

The “Dynamic and Characteristic” motif continues at the back with its cubist styling centered around the high-mounted and stretched rear lamps. When illuminated, the tubular LED brake lights and central LED third brake lamp give the Eclipse Cross a broad and stable appearance.

Inside, the Eclipse Cross feature a horizontal dashboard set with metallic frames. The black/silver monotone scheme creates a sporty, yet refined interior. The thin infotainment display now appears to “float” thanks to being set high. Despite its coupe-like styling, it has uncompromising space thanks to a 60/40 split-folding rear seat.

The Eclipse Cross aims to do justice to its namesake by providing excellent power and environmental performance. A new 1.5-liter direct-injection turbo engine mated to an 8-speed CVT transmission makes its debut on this model. Alternatively, there’s a specially-tuned 2.2-liter common rail direct injection diesel mated to a conventional 8-speed automatic available as well.

No news whether Mitsubishi Motors Philippines will bring the Eclipse Cross locally. Of course, if you pray hard enough to the automotive gods, that may happen.