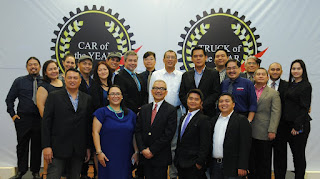 “The Philippine automotive industry has been enjoying robust sales for the past year, with some manufacturers breaking all-time records for number of vehicles sold. More than ever, potential buyers are looking for reputable sources to guide them in making informed choices when purchasing vehicles,” said Robby Consunji, President of the Car Awards Group, Inc. “Independently recognizing the best vehicles in each class without the sway of advertising revenue is CAGI’s contribution to raising public awareness. Our diverse membership from different media platforms has always guaranteed impartial results,” he added.

At the launch, CAGI announced its partnership with auditing firm R.G. Manabat & Co., to further improve the process and methodology in determining this year’s winners. R.G. Manabat & Co. is a Philippine partnership and a member firm of the KPMG network of independent member firms affiliated with KPMG International Cooperative (“KPMG International”).

Established in 2004, the Car Awards Group, Inc. is an organization of motoring journalists from the country’s premier print, broadcast and online publications. Since its incorporation, the group has strived to find the best vehicles in the country through comprehensive testing involving quantitative and qualitative analysis of the vehicle’s performance, design, safety, value and other relevant factors.

The 2015 testing season is open to all “all-new” or “significantly updated” vehicles launched to the local market from October 2014 to October 2015. For purposes of definition, “significantly updated” refers to vehicles that have had significant mechanical or electronic changes to the powertrain, drivetrain, suspension or activity systems that affect the way they drive or operate. Testing dates are scheduled to take place in October at the Fontana Hot Spring Leisure Parks & Casino in Clark Field, Pampanga, followed by a golf tournament and an awarding ceremony to be held on November 13, 2015 to coincide with the Fontana Clark Auto Motorama 2015 to be held from November 13 to 15, 2015.
at 8:39 PM

Email ThisBlogThis!Share to TwitterShare to FacebookShare to Pinterest
Filed Under: Car Awards, News