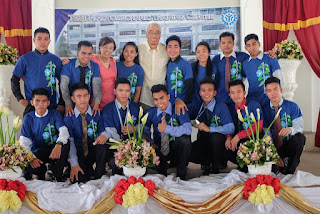 On August 24, the Isuzu-TESDA Technical Training Center in Tacloban, Leyte presented 14 new graduates who have completed their National Competency certification program – a four levelled program that is administered by the regional arm of TESDA.

Isuzu Motors Ltd., although operating in Japan, has been actively supporting this project since 2010 and has given scholarship grants to more than a hundred underprivileged teens in the Visayas. Even after Typhoon Haiyan (Yolanda), IML extended its support to their scholars and their families by providing immediate relief assistance.

In February this year, after facility renovation, the technical center reopened its doors to its trainees and continued its classes. Since its inception, the project has seen an big improvement in the lives of its graduates; most of them are now working in different service centers here and abroad – with the same future awaiting recent graduates.

Take for instance the case of Jhon Moscosa, 22, from Oras, Eastern Samar; who from their home town had been given a chance to have a technical education and is even awarded as the valedictorian of the graduating class.

Moscasa, who had a two-year stint as an IT student, was forced to stop college because there wasn't enough money from his family to send him to school. This is when he heard about the scholarship project – he applied and got accepted.

According to him, even if there was a long pause in his training due to the typhoon and its recovery process, he still chose to continue the program as he believes it will help him land a better job. He said that he is now sure of his future beside from the fact that we can now support his parents back in Samar.

Even before the graduation rites, trainees had already been pre-qualified to work in different Isuzu service centers locally. In fact, most of them have already secured service technician positions in Isuzu dealerships and Isuzu Autoparts Manufacturing Corporation.

“All they needed was the opportunity for an education, we gave them that opportunity and in return we can see that they are helping themselves uplift their status in life” said IML Senior Counsellor Yoshinori Ida. “We are very proud that most of our scholars now are living a more comfortable life, we hope to continue this endeavour for as long as possible” he adds.

In line with the ceremony, the training center welcomes 18 new hopefuls to be included in the Batch 12 of trainees. They will undergo the same NC I-IV certification program that the center offers. According to TESDA Region VIII Director Cleta Omega, TESDA is in the process of leveling up the program by offering a fifth and final diploma course which will focus more on the trainee's supervisorial and managerial skills.

If approved, TESDA can now issue a diploma to all successful students which they can use to apply for a job. As for Isuzu, the company vows to continue supporting this project as they see the results of it changes the life not  just of its scholars but their family as well.
at 12:53 PM