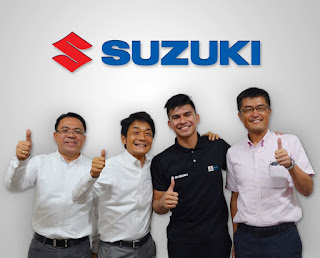 Ravena’s endorsement deal with the carmaker started in 2013, and the Ateneo Blue Eagle player said that his partnership with SPH is his longest running endorsement thus far and that the relationship has been mutually fruitful.

For his part, SPH President Hiroshi Suzuki expressed, “We have always believed that Kiefer Ravena is the perfect celebrity-athlete to promote Suzuki as he embodies someone who is young, fun to be with, reliable, excellent, and active – in short, somebody who exemplifies the Suzuki way of life. As such, we are very excited and happy for this renewal of partnership as his image and reputation will help make the youth sector relate to the things that we represent and offer.”
at 11:31 AM