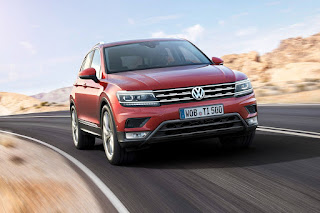 After selling some 2.64 million copies worldwide, Volkswagen is ready to move its compact crossover, the Tiguan to the big leagues. Moving to the new MQB architecture that also underpins the all-new Golf and Passat, the 2016 Tiguan marks the beginning of the brand’s SUV offensive and will actually be available in two wheelbases with the long wheelbase model specifically designed for markets such as the US and China.

But even in standard wheelbase form, it’s larger in almost every dimension while still managing to shed some 50 kilograms in weight. This equates to a significantly larger interior room and a more capacious luggage area. Aside from folding flat, the rear seats can actually slide fore and aft adding to cargo flexibility. Aside from being spacious, it’s now on the forefront of technology with a highly advanced cabin that manages to retain classic SUV cues. It has items such as a heads-up display and an all-LCD gauge cluster called Active Info Display. It also has a three-zone climate control system with built-in pollen and allergen filters. Other available features include powered seats and Volkswagen’s own version of a hands-free powered tailgate. For infotainment, the Tiguan’s App Connect integrates both Apple CarPlay and Google Android Auto.

Powering the Tiguan is a total of eight Euro-6 compliant engines that all have turbochargers, direct injection, a start/stop system, and battery regeneration as standard equipment. The four gasoline (TSI) engines produce power ranging from 125 horsepower to 220 horsepower. Meanwhile, the four diesel (TDI) engines max out at 115 horsepower to 240 horsepower. Transferring all that power is Volkswagen’s 4MOTION all-wheel drive that actively distributes power to all four wheels independently while improved approach (25.6 degrees) and departure (24.7 degrees) assure better off-roading capability. A new 4MOTION Active Control allows the Tiguan to adjust to several terrains such as Off-Road and Snow.

Outside, the all-new Tiguan features a significantly wider stance with the horizontally-aligned radiator grille and headlights. The headlights are dual LEDs. The crossover’s waistline is now higher with the right amount of anthracite-colored cladding separated by a chrome trim strip. At the back, new LED tail lamps and more horizontal themes complete the look. Tires at each corner can be maxed out with 20-inch “Suzuka” alloys.