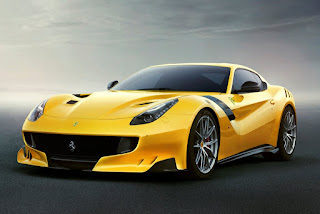 Ferrari unveiled a new limited edition model, the F12tdf which pays homage to the Tour de France. Though unveiled in a striking shade of yellow, the F12tdf isn’t referring to the annual cycling race, rather a grueling GT race that took place in the 1950’s and 1960’s where Ferrari, particularly the 250 GT Berlinetta won four consecutive times. The F12tdf features technical innovations to its aerodynamics, engine, and dynamics and only 799 will be built.

At the heart of the F12tdf is a massaged version of the 6.2-liter V12 engine found in the regular F12. For the F12tdf though, the maximum output is up to 780 horsepower from 740 horsepower. Maximum torque is also up to 705 Nm from 690 Nm. Ferrari engineers have done this using several modifications including race-inspired mechanical tappets and variable-geometry intake trumpets found in Formula One cars. In addition, the F1 DCT sees a 30-percent increase in upshifts and 40-percent downshifts along with a 6 percent shorter gear ratios.

In terms of dynamics, Ferrari engineers used know-how taken from the XX programs to make the F12tdf even more agile. First up, tire sizes have jumped particularly in terms of front tires with 255 to 275-mm in width. This guarantees higher lateral acceleration. Ferrari has also developed its new Virtual Short Wheelbase system that allows the F12tdf’s rear wheels to pivot around a vertical axis. It also has rear-wheel steering making it equally adept on twisty roads as well as stable at high speeds.

Finally, styling tweaks have been done to improve the F12tdf’s aerodynamics. It can generate 230 kilograms of downforce at 200 km/h—an impressive 107 kilograms more than the regular F12. This has been done through a competition-style front splitter, dive planes, floor wings, and louvers. Even the rear spoiler is 60-mm longer and 30-mm higher with the rake of the rear screen more vertical. Setting the F12tdf apart, it has new bodywork panels giving it an even wider, lower appearance.