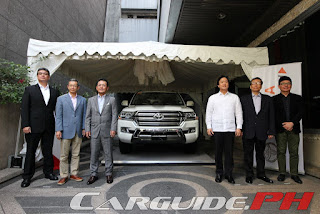 No other vehicle out there is synonymous with power and prestige as the Toyota Land Cruiser. As Toyota’s flagship SUV since 1951, the go-anywhere and do-anything quality of the Land Cruiser combined with its uncompromising mix of power and comfort has earned it diehard fans everywhere (it’s actually sold in all global Toyota markets barring three—Canada, North Korea, and South Korea). The latest iteration, the Model 200 has been around since 2007 but now sees a substantial upgrade that makes it worthy to be called an all-new model. In other words, power gets an upgrade.

“In the spirit of ‘Always Better Cars’, we are committed in constantly bringing new and exciting changes to delight our customers,” says Mr. Michinobu Sugata, President of Toyota Motor Philippines.

Reworked extensively from tip to stern, the 2016 Toyota Land Cruiser 200 features an entirely new front-end design. The larger hexagonal-shaped grille with horizontal detailing gives it a more aggressive and menacing appearance. This is joined by the re-worked headlights featuring bi-LED illumination along with LED front fog lamps. A re-sculpted front bumper completes the look. At the side, new chrome door moldings and 18-inch alloy wheels with 285/60R18 tires add toughness while a new tailgate, LED tail lamps, and rear bumper cap off the changes. The high-grade model adds a front bumper overrider emblazoned with the words, ‘Land Cruiser’ and side body stripes.

Inside, Toyota has re-worked the cabin to further emphasize the Land Cruiser’s place as Toyota’s flagship SUV. The changes start with the new steering wheel design followed by a new instrument cluster fitted with a 4.2-inch multi-information display. Other new interior features include illuminated scuff plates and a cool box storage. The fully-optioned LC200 Premium adds even more niceties including a power adjustable steering wheel, built-in memory for the driver’s seat, a moon roof, a 4-zone climate control, and even a touchscreen audio-visual system with navigation and Bluetooth.

The running gear underneath the LC200’s massive front clip remains unchanged, but it still is one of the most powerful engines in terms of torque. The 1VD-FTV 4.5-liter V8 engine featuring common rail direct injection and a twin-turbo system generates a stout 232 horsepower at 3,200 rpm and an earth-shattering 615 Nm of torque from 1,800 to 2,200 rpm. A smooth-shifting 6-speed automatic pairs with this engine and a 93-liter fuel tank ensures a long range.

Cementing its reputation as one of the segment’s best on- and off-road luxury vehicles, the Land Cruiser 200 comes standard with an Independent Double Wishbone front suspension and a rear 4-Link coil spring suspension equipped with a lateral rod. An electronically controlled full-time 4x4 system with a Hi/Lo setting along with a differential lock give excellent rock crawling abilities. New for 2016 is the Kinetic Dynamic Suspension System or KDSS, a system by which the front and rear stabilizers are optimally controlled by interconnected hydraulic cylinders. The LC200 Premium adds even more handling goodies such as Vehicle Stability Control (VSC), Traction Control (A-TRAC), Hill-Climb Assist (HAC), Multi-Terrain Select, and CRAWL—the first and only driver assist feature in its class that makes off-roading safer and easier.

“One cannot deny the prestige of the new Toyota Land Cruiser 200. With its more aggressive stance and additional innovative features, the latest model will do justice to the SUV’s long-standing heritage of reliability, luxury, and authority,” adds Mr. Sugata. 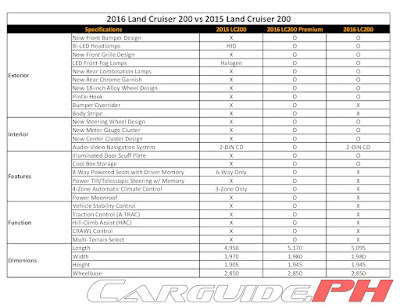