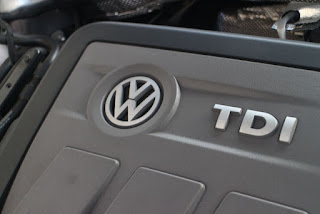 UPDATE 2: The Dieselgate scandal has caused some heads to roll (9/26).

Volkswagen is the middle of a corporate catastrophe that undermines a loss of trust towards consumers and government regulators. Just last week, the US-based Environmental Protection Agency (EPA) has discovered that certain VW models are able to circumvent emission requirements during testing with a “defeat device”. This affects close to 500,000 cars and could also mean that the German automaker could face stiff fines.

This all started when a non-government organization, the International Council on Clean Transportation noticed discrepancies between tests of diesel Volkswagens in Europe and in the US. Wanting to verify VW’s “clean diesel” claim, they borrowed equipment from the West Virginia University to test emissions in real-world driving conditions. While the VW models pass the laboratory tests performed by the California Air Resources Board (CARB), they failed the real-world test, which measures tailpipe emissions.

With VW engineers unable to explain the discrepancies, the EPA and CARB launched an investigation. It was only when regulators threatened to withhold certifications and halt sales did Volkswagen fess up to using a cheat device.

In order to meet tougher emissions regulations, carmakers are now increasingly reliant on diesels that use urea-based additives to cut down Nitrogen Oxide or NOx emissions. However, VW touted that its 2.0-liter TDI can meet these regulations without the need for the costly urea injection system. This includes: 2009-2015 TDI Golf, Jetta, Beetle, and the Audi A3 as well as 2014-2015 Passat.

Instead, the EPA discovered that these cars contain a sophisticated software algorithm which detects when a car is being tested for emissions. When this happens, the software triggers a change in engine management that cuts down emissions dramatically. During normal driving situations, affected VW models could have up to 40 times the legal limit of NOx.

NOx is a contributor to smog and can cause a wide range of health problems for people including asthma attacks and respiratory illness. It’s also linked to respiratory-related or cardiovascular-related diseases especially to the children and the elderly.

Consumer Reports says that the computer software in affected VW models could detect when a car is put on a dyno basically because the front wheels spin on a rolling road and the rear wheels remain stationary. Normally, this should trigger safety features such as the stability or traction control. To prevent the driver aids from kicking in, testers put the car into a dedicated “test” mode to complete the procedure without stability or traction control interfering.

Although no recall has been made as of yet, Volkswagen USA has already issued a stop-sale on all remaining 2015 models using the 2.0 TDI engine in the US. Meanwhile, the EPA says they’re withheld the 2016 “certificate of conformity” meaning VW cannot sell cars with this particular powertrain configuration to the public. Currently though, VW stands to lose out 20-25 percent of its US sales volume. Furthermore, they can be slapped with a huge fine amounting to about US $18-billion.

Volkswagen USA President and CEO, Michael Horn publicly apologized at launch of the all-new 2016 Passat and says his company will cooperate with authorities.

In the long run though, Volkswagen may face a loss of trust with this so-called emissions cheating. Just today, the company has lost some 20 percent of its stock value and European regulators now want to open their own investigation on possible emissions violations of the brand. It can also drag and tarnish the reputation of VW’s other brands including Audi and Porsche that use the same TDI engine.

UPDATE 1: Volkswagen has just revealed that this emissions by-pass code is present in all models equipped with the Type EA 189 common rail diesel engine.

This is the company’s most widely used motor and is present in models from Volkswagen, Audi, to even Seat and Skoda. This affects 11 million vehicles globally. They are now coordinating with authorities and the German Federal Motor Transport Authority. The company has also set aside 6.5-billion Euro that the company may need to pay off either regulatory, individual, or class-action lawsuits.

They have clarified however that engines that are certified Euro 6 do comply with all legal requirements and environmental standards.

On a separate note, the EPA and CARB have now started to investigate the 3.0 V6 TDI used in several Volkswagen, Audi, and Porsche models in the US as well.

Volkswagen CEO Martin Winterkorn has issued a public apology about the incident.

UPDATE 2: Martin Winterkorn has stepped down as Volkswagen CEO. Replacing him is Porsche CEO Matthias Müller. Mr. Müller will continue on with this function until a replacement is found.

UPDATE 3: Volkswagen Philippines has issued an official statement saying that all vehicles distributed and sold in the Philippines are not affected by the particular software used in diesel engines. See the full statement below:

We at Volkswagen Philippines sincerely apologize to all our customers for the undue stress and inconvenience this issue may have caused.

All vehicles distributed and sold by Volkswagen Philippines comply with Philippine emissions regulations and standards.


Volkswagen Philippines highly appreciates the continued trust and confidence provided by the Filipino consumers to the Volkswagen brand.
at 9:54 AM