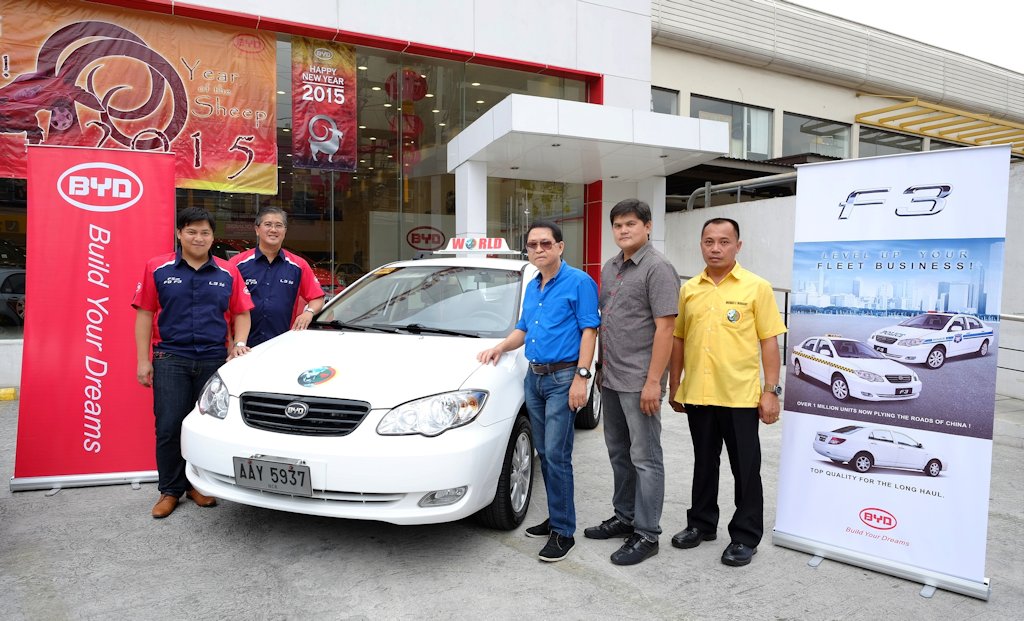 “These are exciting times for STAR Corp. as we roll out our first taxi fleet in the Philippines.  The BYD F3 is designed for the Filipino commuting public, who deserve more space and comfort.   It is fuel efficient and represents real value for money,” said Tieng.

The BYD F3 Taxi is a four-door compact sedan specially developed for fleet operations as it comes with provisions for Taxi Meter, Top Mount Light, and a “For Hire” Lamp.  It is bigger, wider, longer and roomier than all other current taxi models resulting in a pleasant ride.  Five occupants, including the driver, can fit inside the F3 comfortably with ample legroom and elbowroom. The F3 features a Euro 4 compliant 1.5L 473QE engine, which is an ultra-efficient aluminum power train that uses less fuel.  It combines VVL (Variable Valve Lift) and EGR (Exhaust Gas Recirculation) technology to maximize power while minimizing its environmental impact and fuel consumption.  With its five-speed manual transmission, shifting gears are smooth and effortless.

The F3 is safer than other taxi cabs on the road as it is equipped with Bosch two channel Anti-lock Brake System (ABS) with non-stop monitoring Delphi EBD (Electronic Brake Force Distribution), which together give the driver greater control during emergency braking. It also has full-size front and rear fog lamps, rear defogger, LED brake lights, as well as a third LED high-mounted brake light to arm any driver with all the means to assure passengers greater safety and confidence in his driving.

In addition to owning the reliable and safe BYD F3 Taxi, fleet owners will have access to excellent after sales service, a steady supply of original parts and accessories, as well as a caring fleet account manager to assist in the maintenance of the F3 taxi fleet.

“With its high-quality and excellent performance, the F3 has had wide satisfaction ratings in several countries worldwide.  In China it is used as police cars in Guangdong, China by the Huizhou Police Station as well as the local social safety service vehicle since 2008.   The F3 is also being used by the Chinese government and its judicial department in Henan, Xian and Shenzhen, China, as their service vehicles,” Tieng shared.

“In other Asian countries, the Middle East, and even Latin America, the F3 is the car of choice for taxi fleet operations as well - in Phnom Penh, Cambodia in 2008; in Egypt, through their Financial Department of Cairo, where the F3 replaced 80,000 city taxi units in 2009, and in the Dominican Republic, which acquired 500 F3 taxis in 2010,” he added.
at 11:40 AM

Email ThisBlogThis!Share to TwitterShare to FacebookShare to Pinterest
Filed Under: BYD Corporate, News