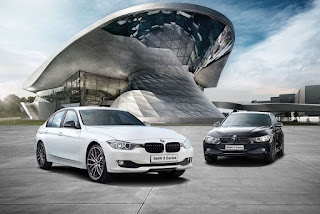 The BMW 3 Series can look back over an extraordinary career path. Among the key milestones along the way have been its success in pioneering a new vehicle category, establishing itself as the embodiment of the distinct BMW drive in its segment, and becoming the world’s top-selling premium car.

As the German automotive giant celebrates the vehicle’s heritage and success, its official importer and distributor in the Philippines Asian Carmakers Corporation, launches the BMW 3 Series Anniversary Edition – a fitting homage to 40 years of sheer driving pleasure and the ultimate driver’s car.

A long bonnet and long wheelbase, short overhangs, and set-back passenger compartment represent the underlying character of the BMW 3 Series that endures from generation to generation. While the BMW 3 Series Anniversary Edition reflects these BMW core attributes, it presents a more agile and powerful appearance that sets it apart from models in its range.

The striking front end features twin circular headlights and BMW kidney grille in black gloss finish to complement the sporty look that runs along the flanks of the BMW 3 Series Anniversary Edition. Along the sides, the special automobile dons an 18-inch BMW M Performance light alloy wheels in double-spoke style 405M. This is matched by exterior mirrors in carbon fiber housing with integrated turn indicators and automatic anti-dazzle function.

At the rear, the BMW M Performance rear spoiler in body color finish is quick to captivate attention and lends the car an even more dynamic appeal. Signature L-shaped rear lights with LED clusters and a tailpipe in high gloss chrome finish complete the sporty look of the BMW 3 Series Anniversary Edition.

The BMW 3 Series Anniversary Edition gives the familiar comfort, high-quality materials, and outstanding ergonomics unique to the line-up but goes the extra mile in illustrating the perfect balance of form and function.

Apart from offering a host of storage possibilities, entertainment and connectivity features, such as an Alpine high-fidelity speaker system, add to the enjoyable usability of the BMW 3 Series Anniversary Edition. For increased safety, the vehicle also includes a BMW Advanced Car Eye on-board camera, a full HD dashboard camera that detects critical situations while driving and offers a better view when parking.

The first generation of the mid-sized sedan delighted customers with a level of sporty handling joined by an economical engine never before offered in the segment. The commitment to performance and efficiency remains true today as the BMW 3 Series Anniversary Edition runs with a brawny engine combined with balanced weight distribution.

The BMW 3 Series Anniversary Edition BMW TwinPower Turbo engine coupled with BMW’s award-winning eight-speed automatic transmission with Steptronic. The diesel-powered sedan sprints from 0 to 100 km/h in under 9 seconds with a 143 horsepower and a peak torque of 320 Nm. Engineered with BMW’s EfficientDynamics technology, the vehicle’s engine also enables minimal fuel consumption to promote smart and sustainable mobility without undermining performance.

First unveiled at the 1975 International Motor Show (IAA) in Frankfurt, the BMW 3 Series has developed into both the brand’s most successful model range and an international bestseller. The history of the BMW 3 Series is a testament to the passion and innovation of the German carmaker in sporting ability, safety, comfort, connectivity, and efficiency.

Through the years, the introduction of trailblazing technological innovations in the BMW 3 Series has broken new ground in the mid-size class. The BMW 3 Series has led the way with new vehicle concepts reflected in the brand’s model line-up and injected fresh ideas into the premium automotive segment.

Today, as in 1975, purchasing a BMW 3 Series represents an expression of joy in sporty handling, enthusiasm for innovative technology, and appreciation of premium quality. In the Philippines, the BMW 3 Series has consistently echoed its global success by becoming a popular vehicle choice among discerning Filipino customers.
at 11:59 PM