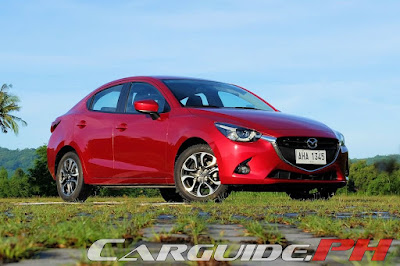 No matter how you look at it, the subcompact segment is a competitive one. Before, it was all about getting to Point A to Point B in the simplest, most no-frills way possible. It was entry-level motoring at its finest or at its worst. Today though, things are pretty different. Buyers are getting picky. They demand style, handling, and fuel economy—in other words, they want everything. And they’re not willing to pay a pretty penny for them too. It’s got to be affordable as well. Such is the world car manufacturers find themselves in; such is the world the Mazda2 has to fight in.

Far and large, the Mazda2 is a car that punches above its own weight; it’s the Manny Pacquiao of subcompacts. Mazda always compares their cars to predatory cats on the hunt, but being a pugilist looks more befitting in this case. The design alone is evocative of a boxer with his fists raised close to his chest. The long hood, taut lines, and highly stylized front-end is pure pent-up energy, ready to unleash a knockout blow at any time. And far as the competition’s concerned, they’re already down for the count. Between the sedan and the hatchback, the latter’s the better looking one, but both are well penned and proportioned.

And then, you just have to drill down into the details. The range-topping 1.5 R, for instance, carries a lot of stuff, most of which you won’t expect in a sub-compact: it’s got Mazda’s own version of cat’s eye LED daytime running lights with automatic bi-xenon headlamps and even two-tone 16-inch alloy wheels. And see those exterior blackened panels? They aren’t plain; they’re textured to look like carbon fiber.

Inside, the simple-to-understand and straightforward cabin encourages a “get in and drive” mentality. It’s minimalist in its design, enabling you to concentrate on driving controls like the gauges, steering wheel, and so forth—in a minute, tops, you’re able to get comfy and drive off. The interior’s free of unnecessary clutter and distractions. As you settle into the driver’s seat, a feeling of familiarity sets in: the ergonomics follow the same principles laid down by the 3 and the 6. The steering wheel, the pedals—they’re all where you expect them. This car is clearly designed to be enjoyed.

Of course, being minimalist doesn’t mean it’s lacking in features. On the contrary, it’s one fully-loaded machine with niceties such as heads-up display, steering wheel controls, automatic climate control, and of course, the Mazda Connect infotainment system. In other words, it’ll make some executive sedans look and feel dated. Still, it’s not without its flaws. First, although it’s kitted with leather and nicely metalized trim, the plastics aren’t on the same level of the 3 or 6; they’re a notch lower. Still, you have to commend them for at least coming up with consistent texturing around. Second, the doors close with a tinny sound, not exactly connoting a feeling of solidity. Finally, the space is tight, especially in the back seat. Plus there aren’t much cubby holes to speak of.

But these shortcomings are all forgiven because the Mazda2 is unequivocally the best dancer around. In fact, it can teach cars a notch above a lesson or two when it comes to just being fun. On paper, it doesn’t offer anything new: a 1.5-liter engine, a combination of MacPherson Struts at the front and a Torsion Beam Axle at the back, and so forth; but like how a champion boxer must be multifaceted, meaning he can box hard, remain agile, and have great stamina, the magic of the 2 happens when the ingredients come together.

The sporty design of the Mazda2 extends beyond the aesthetics. Underneath, the entire drivetrain works in unison, creating an experience of connectedness. Trying out the base 1.5 S sedan first, the most noticeable thing is how the throttle response has been optimized to match the engine’s character. The shifts are predictable resulting in seamless acceleration. It’s got Sport mode, but there’s little need for it unless you’re pushing really hard. If there’s one criticism, it’s how the steering feels light. Though it tightens up at speed, it’s numb in the city.

Tackling the Viaje del Sol or Journey of the Sun (so-named because taken in the proper sequence you get to follow the sun from sunrise to sunset), the 2 has a long road ahead of it: some 309 kilometers. This drive traverses three provinces: Laguna, Batangas, and Quezon. Swapping to the 1.5 R, the difference in steering feel is obvious. The numbness is gone, replaced by one with good heft. On both models though, it’s linear through corners, removing the need to do minute corrections as you go in. The car does tend to pitch, but that’s all part of the design. The tires though are the weakest point, being noisy at speed and gives up grip easily; a switch to stickier tires would be the best first upgrade. The ride sacrifices some of its plushness to make it feel more planted and secure. Indeed, dips and bumps do little to unsettle it.

Mazda pulled off a miracle job with the Mazda2. As a company, they’re hell-bent on preserving driving fun in whatever category they compete in. Still, the sub-compact segment presents a unique set of challenges, the most obvious of which is price sensitivity. Unlike the 3 and 6, Mazda can’t simply price the Mazda2 in the million-peso range and call it a day (the 2 is priced from P 795,000 to P 925,000). And on top of that, they can’t treat the 2 as an undercard fighter; it has to preserve the brand’s premium mainstream positioning. Sounds impossible? Not this time. The Mazda2 has shown the world how the feisty little fighter from Hiroshima can outpunch, outrun, and outlast the competition.