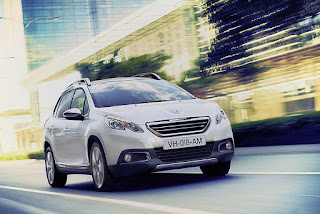 After launching the 301 compact sedan just a few months back, the reinvigorated Peugeot is entering a new market segment once more, and this time, it looks to be yet another convincingly individual choice: this is the Peugeot 2008 and this could potentially be your new small crossover.

The first Peugeot to be designed with the global market squarely in mind, the 2008 is meant to satisfy the needs and wants of a vast array of customers around the world, some of whom are newcomers to the French brand. Integrating agility and dynamism, the Peugeot 2008 draws from the company’s dual expertise of design and engineering.

Adopting the newest styling cues, the 2008 features an intricately sculpted hood that connotes both strength and lightness. The indented center portion acts as a resting place for the Peugeot lion crest. The trademark floating grille face meanwhile evokes aerodynamic performance and efficiency. The chiseled headlamps with LED daytime running lights further accentuated the car’s feline-inspired bodywork. At the side, a roof wave line emerges just above the rear seats giving it an unmistakable profile that highlights the feeling of leisure expressed by the 2008. At the back, the low loading sill and wide tailgate are framed by taillights with three luminous claw highlights.

The raised ground clearance together with the pronounced wheel arches gives it a planted and secure stance. The lower blackened bumpers and body sills serve to protect the car from unwanted abrasions while stainless steel protection moldings found throughout the car add a touch of class.

Inside, the 2008 continues the trend first introduced in the 208 GTi: the i-Cockpit concept. Comprised of a compact steering wheel (with tilt/telescopic adjustment), heads-up dials, a high center console, and a huge touchscreen for the infotainment, this layout promises to be both visually and ergonomically pleasing. It allows the driver the read and operate the vehicle with minimal distractions, and this is even without the use of an additional heads-up display. Apart from the i-Cockpit concept, the 2008 features a “Cielo” panoramic glass roof adorned with LED mood lightning. The sportiness quotient is raised by body-hugging leather seats—the best you can find in any crossover, says Peugeot.

Incorporating French fun and flair right from the start, the 2008 is quite compact; at just 4,159-mm long, it allows it to retain the driving characteristics of the 208 of which it is based on. With 195/60R16 wheels at each corner and a combination of MacPherson Struts and a Torsion Beam Axle at the back, the 2008 is made to dance through corners in a lithe manner. Plus, letting you enjoy a comfortable drive in the city or during a long drive, it’s powered by a 1.6-liter petrol engine with 120 horsepower and 160 Nm of torque. Mated to a 4-speed automatic, it balances power and efficiency for a truly comfortable driving experience.

Priced at P 1,390,000, the all-new Peugeot 2008 1.6 Allure merges French design and innovation with the requirements of their increasingly global customer base. It reinvents the notion of what a small crossover can be. Not straddled by the mediocrity of more mainstream choices, it’s a moving affirmation of individuals who seek practicality, comfort, and unmistakable design. 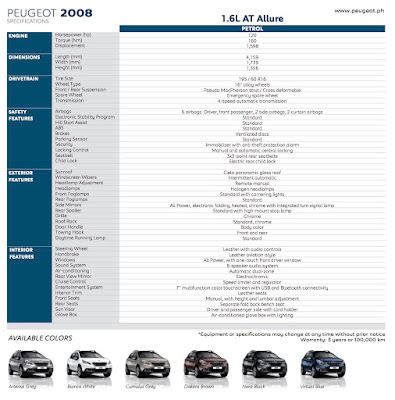