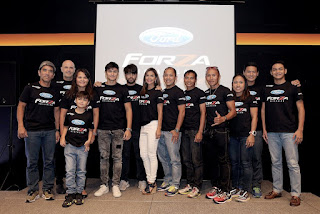 Ford Philippines recently announced their renewed year-long partnership with the Ford Forza Triathlon team during the Ford Forza 2016 Refuel, an event celebrating the team’s accomplishments in 2015 and introducing new members adding to the diverse roster of talented athletes at B Hotel in Quezon City.

“We are extremely proud of our partnership with the Ford Forza Triathlon team and honored to share this journey with them. The team has been training hard and was recognized with multiple team wins and accomplishments in 2015, proving how they are Built Ford Tough. This 2016, Team Ford Forza is refueled  to do more, achieve more and inspire more,” said Minnie Valencia-Bustamante, vice president of marketing and sales, Ford Philippines.

Through the partnership, Ford will continue to help mobilize the Ford Forza Triathlon team with its class-leading vehicle offerings that match and complement their various personalities and lifestyles.

Team Ford Forza has been recognized globally for their world-class competitiveness. In the past year alone, Gianluca, Jomer, Giorgia, Matteo and Ivan earned the prestigious title of IronMan Silver All World Athlete, which rewards the top five percent triathletes of their respective age groups for their hard work, dedication and performance in IronMan and IronMan 70.3 racing.

“The year 2015 was the beginning of Ford Forza team’s amazing year of achievements. We were able to touch the lives of many people, including our sponsored athletes in the team. We continue to inspire through our dedication and commitment to our daily training and races.  This 2016, we will work and race harder, tougher and happier. We are extremely proud of our members and their accomplishments, and together with our friends at Ford, we hope to continue promoting a healthy and fit lifestyle that will serve as an inspiration to all Filipinos,” said Gianluca Guidicelli, team captain of Ford Forza.

Fueled by a winner’s mentality and a ‘Go Further’ attitude, the Ford Forza Triathlon team is geared up for another strong year as they look to do more in the triathlon circuit.