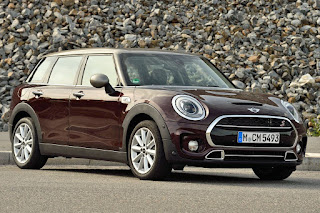 MINI Philippines showed off a more grown-up, more sophisticated side when it unveiled the all-new Clubman. Set to make waves in the premium compact segment, the 2016 Clubman offers MINI’s highest levels of practicality, long-distance sustainability, versatility, and ride comfort.

Now with four doors and the characteristic split door at the back, the Clubman opens up to a generously sized and versatile interior with five full-fledged seats. Its luggage compartment has a volume of 360 liters and can be expanded to 1,250 liters by folding down the 40/20/40 split-folding rear seats. And while meeting the functional requirements of the compact class, it retains the same unconventional thinking MINI is known for such as individual style and outstanding driving fun.

“When the MINI Clubman was first presented in 2007, it was responding to a desire for space to accommodate more passengers and luggage as well as to expectations of a 21st century automobile in terms of comfort, safety and efficiency. It took the shooting brake concept in MINI style to a whole new dimension. Today, the new MINI Clubman far surpasses its predecessor not only in dimensions but in providing an overall better driving experience packed with more technology and innovations than before,” said Mr. Willy Tee Ten, President of MINI Philippines.

Offering the modern interpretation of the “shooting brake concept”, the all-new Clubman features familiar MINI design cues such as the circular headlamps, hexagonal contours of the radiator grille, and the power dome hood. New “Air Curtains” channel airflow better reducing aerodynamic drag. The most standout aspect of the Clubman’s design though is the split rear doors. On the new model, the central bar between the two glass sections has been minimized thereby improving rear visibility. It also gets horizontally-oriented rear lights, a new for a MINI. The sportier Cooper S Clubman gets a revised bumper with an integrated diffuser element and two exhaust tips set wide apart.

Inside, the Clubman features an exceptionally wide instrument panel with the trademark central instrument cluster that displays various vehicle functions via the 6.5-inch LCD screen. A decorative strip emphasizes its width and this continues all the way to the rear portion giving a harmonious look and feel. New in the Clubman is the MINI Yours Interior Styles feature that allows a customizable lighting package along with the LED interior lighting to set the perfect mood.

A full range of driver assist features are available on both models including standard rear parking sensors. Customers can also up that by selecting front sensors, a rear back-up camera, and even a camera-based adaptive cruise control with collision mitigation and a pedestrian warning system.

Bigger, more practical, and slightly more mature, the all-new Clubman allows additional market segments to get a taste of the distinctive MINI feeling without detracting from the innovative, driver-oriented experience the brand is known for.