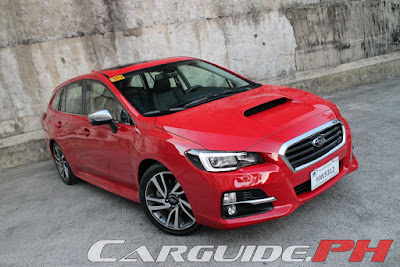 Frankly, it’s hard to classify what the Subaru Levorg is. Subaru calls it a compact sports tourer which is marketing speak for: We can’t decide if it’s a compact car, a sports sedan, or a wagon, so we’ll just blend it all together. And true enough, the recipe of the Levorg is largely that: a front-end shared with the WRX, a dashboard similar to that of an XV, and the trunk space comparable to that of a Forester. And while this amalgam of Legacy + Revolution + Touring sounds as disastrous as “Aldub”, the resulting car is actually quite good. It’s excellent. It’s a gamble that’s paid off handsomely for Subaru.

Outside, it’s clear the Levorg is based off the WRX (sharing even its wheelbase) but with more chrome. There’s some of that bright work on the grille, fog lamp clusters, window moldings, and mirrors. The front bumpers have been massaged, adding some curves near the fog lamp clusters that lessen the Evo-lookalike vibe. It’s from the B-pillar backward where the Levorg gets its own unique character. The long, angular roofline that stretches past almost to the taillights is reminiscent of the boxy Volvo 850 wagon and for that alone, it gets sexy points. And on top of that, you get turbine-style 18-inch alloy wheels with high-performance tires and twin tailpipes with a built-in diffuser. This is so much win.

Inside, the Levorg is a case of “if it isn’t broken, why fix it” and thus, it replicates the WRX’s driver-oriented cabin down to the flat-bottomed steering wheel. The driving position is spot on and exterior visibility is excellent thanks to the large windows. There are no complaints with the available space for the front occupants. The seats, with their generous bolsters, are extremely comfy and you can actually spread your legs without fear of banging knees anywhere. And understanding they have to lure a more sophisticated set, it’s got upped touch points with more leather, more chrome, more piano black accents, a lit glove box, and one-touch operation for all the windows. It also has a touchscreen infotainment system with voice controls that actually work and six USB charging points scattered throughout the cabin. Blue hues break the black color scheme and it’s everywhere—the seats, the gauges, and at night, the climate controls. Oddly enough, all other controls not located on the dash itself (steering wheel, windows, transmission tunnel) are still lit in red. This is the first Subaru with mismatched interior lighting and hopefully, it’s going to be the last.

While those in front will be all thumbs up for its supportive seats and cavernous interior, those in the back won’t be as lucky. The rear seats, though capable of seating three, will have to live with compromised comfort. Although the seat backs themselves are adjustable via a lever, the cushion length barely reaches the middle of the thighs forcing those in the back to sit uncomfortably straight resulting in, likely, sore bums after hours in traffic. As a grocery getter, the Levorg has a taller and wider, but shorter cargo compartment compared to say, the Mazda6 Sport Wagon. In terms of numbers though, it gives up 78 liters in trunk space compared to the Forester with the rear seats folded (1,446 versus 1,524 liters).

The hood-mounted scoop hints at some sporty pretensions and in that regard, the Levorg doesn’t disappoint, largely. The sole engine is a direct-injection, turbocharged version of the FB16 with 170 horsepower and 250 Nm of torque. Driven smoothly, there’s good pull from the engine and the power delivery is surprisingly linear. It feels more like a normally-aspirated 2.5-liter engine than a forced-induction motor except for the characteristic turbo whistle past 3,000 rpm. It’s also surprisingly quiet even at past 100 km/h, where the only unfiltered sounds are from the tires and sometimes, the suspension bits bobbing up and down. It’s only when you drive it hard that the weaknesses show. Jab the throttle and for a split-second, you can feel the CVT shuffling its ratios. From almost no power, it gives a jolt of torque past 2,000 rpm. This unpredictable on/off power delivery is somewhat quelled when engaging ‘Sport’ on the Subaru SI-Drive, but you should be ready to hit the brakes anytime. Thankfully, this car’s got front and rear vented disc brakes.

Locally, the Levorg is the first Subaru model equipped with an idle start/stop function. It operates smoothly and is unobtrusively. And for the geeks at heart, the gauge cluster actually displays the liters of premium unleaded saved. Surprisingly, that did little to lift the Levorg’s fuel efficiency numbers. It manages just 7.93 km/L in heavy (average speed 15 km/h) and 10.41 in light traffic (average speed 24 km/h). Still, it can realistically do 400 kilometers between fill ups thanks to a generous 60-liter tank.

The WRX-based underpinnings allow the Levorg to be quick in a straight line as well as through corners. It’s fun, maneuverable, and tossable through curvy roads. The initial turn in is quick and it’s mighty predictable thanks to the well-tuned chassis. It’s not as quick as the WRX, but without a back-to-back comparison, you can’t tell. The chassis’ predictability is closely matched by the flat, almost non-existent body roll making this one confident car to push flat out. Subaru says they’ve benchmarked the Volvo V60 and Audi S3 in developing the Levorg, and it shows. And get this: it doesn’t compromise the ride in any way. It rides firmly for sure, but it remains controlled whether it’s absorbing undulating potholes or road cracks.

Subaru’s chop suey strategy shouldn’t make any sense, but with the Levorg it does. Priced at P 1,718,000, it’s trapped in a sea of executive sedans and compact crossovers, and yet, it stands out not just for its excellent handling but for its quirky and unique packaging. Let’s also not forget that it’s now Subaru’s now affordable turbocharged model. For this price, it comes packed with features some of which aren’t available in other more expensive Subaru models. Apart from the idle start/stop, it has blind spot monitors, cross traffic alert, and even a high-beam assist for the headlights. Of course, like all other Subarus, the Levorg is destined for the owner-driver. It’s fun and enjoyable rather than plush and cushy. Subaru has given the best they’ve got with the Levorg and for that, it’s worthy of consideration.