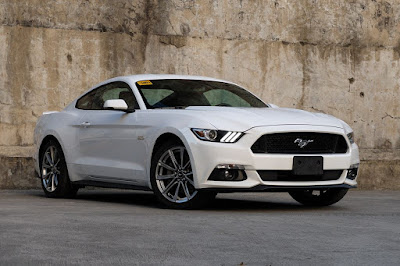 At fifty years old, the Ford Mustang has been everything: the object of fantasies, a movie star, a tuner’s dream, a status symbol—needless to say, it requires no introduction. Yet, this newest Mustang marks the biggest change to the pony car since generation one and for that, getting reacquainted is necessary. And it’s not simply because this new car trumps the old one, but it redefines what the Mustang is and successfully brings it to the modern era. Forget everything you know about the pony car. History is about to be re-written here.

Basing everything on the cover though, it’s hard to tell that this is a new chapter of the Mustang story. In all angles, it’s instantly recognizable: pure muscle car with its angular design and squat-down stance. But because it pays homage to its long history, it looks more like a heavily massages version of the previous model rather than an all-new design. Still, it’s been tweaked and chiseled, modernizing the look while removing some of that retro flavor.

While the exterior still relies a bit on the Mustang’s storied past, the interior removes any traces of the model’s penchant for cheap plastics. It’s a major improvement inside with the design alone making for a nice viewing. And then, you settle in and start to poke around, noticing the well-finished plastics and crisp controls. The brushed metallic trim running the entire length of the dashboard is a great touch as is the commemorative plaque on the passenger side. There are only two gripes here: first is the sheer multitude of buttons. This can disorient a new driver, but after a few days, it’s easy enough to adjust to it. The second is the toggle style switches on the center console. The markings are just too light meaning you can’t tell what each toggle is for during the daytime.

Make no mistake though, it’s the best Mustang interior ever and this is something reflected in the ergonomics as well. The seats are more cushy than supportive and the position is more cruiser than sports car making it great for eating miles effortlessly. Despite the hood bulge, it’s easy to slot it around in traffic although the small mirrors do rob a bit of rear visibility. Thankfully, the rear parking camera helps during trickier parking maneuvers. The steering wheel falls right into hand and so do the other controls.

The outgoing 5.0-liter V8 could already eat some supercars for breakfast, and now, it’s just gotten better with even more power. Surprisingly, it’s quiet at idle but quick to change personality when you press the throttle. It obliterates the 100 km/h mark in about five seconds—faster than any Ford since the Ford GT super car. It sounds great doing that too, producing a well-orchestrated mix of burly, baritone notes. The 6-speed automatic is well-paired to the engine, delivering quick and smooth shifts. The Mustang finally gets paddle shifters, but they’re unneeded on regular or even spirited driving. It’s only when you flog it on a race track where that additional manual control is needed. Of course, such power and potency does have its drawbacks. In this case, it’s the penalty of living with a fuel mileage of 4.17 km/L.

Best of all: the suspension has cured the Mustang’s distaste to bumps. It’s hard to overstate how much the independent suspension on all four corners mean to the experience. Finally, you don’t have to wait for the chassis to settle down before entering a turn. You don’t have to worry about going onto rumble strips while the car skips around helplessly. You can even power out of a turn on uneven pavement without risking losing control. Finally, the wheels can put all that power down. There’s little need to tiptoe through corners. It finally has all the fun and confidence to let loose.

There’s still a lot you can say, but the bottom line is this: it’s not just a new chapter in Mustang history; it’s an entirely new book. Not only is it great in a straight line as a muscle car should be, but it actually handles like a proper performance car. And for P 2,999,000, it’s a steal considering the level of performance it can dish out. For the money, nothing can touch the Ford Mustang. Not even excuses.