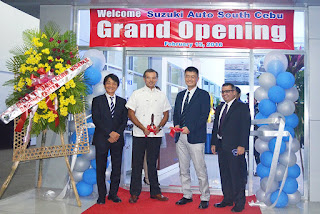 It is another promising year for Suzuki Philippines Inc. (SPH) as the only integrated automobile and motorcycle company in the country adds two branches to its long roster of newly-opened dealerships: the Suzuki Auto South Cebu, and the SM Seaside City Satellite, both in Cebu City. Last year’s rapid expansion of the automobile brand saw more than 10 new dealership launches, which the company hopes to top this 2016.

Suzuki Auto South Cebu, a 3S (Sales, Spare parts and Services) shop, is tactically situated at the very commercial South Road Properties, Mambaling Road, Cebu City. It started its sales operations as early as June 2013 and the dealership construction was completed in February 2015.

With the rapid and consistent economic growth of Cebu, Suzuki’s twin launches here are well timed and well placed. SPH General Manager Shuzo Hoshikura shares, “It cannot be denied that the thriving economy here is the main reason why we established Suzuki Auto South Cebu and the SM Seaside City Satellite showroom. These give us the opportunity to proffer the Suzuki Way of Life to motorists in Cebu, most especially since we are now in the newest attraction of the City – SM Seaside City, the third largest shopping mall in the country.”

Suzuki Philippines, the leading manufacturer of mini and compact cars, achieved its massive sales growth last year through successive dealership openings. Mr. Hoshikura adds, “We are proud to say that we ended with a huge 52 percent year-on-year growth last year, kicked in by massive and successful dealership and satellite openings. Not resting on our laurels, we are starting the new year right by inaugurating two newest additions to our growing network of dealerships, and we’re very happy that it’s happening here in Cebu”
at 11:57 PM