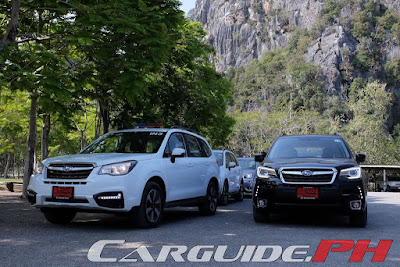 The Subaru Forester is being attacked from the most unlikely source: the mid-sized 7-seater SUV. Though this compact crossover has its segment down pat, the allure of having a larger SUV with seating for seven has affected sales somewhat. This is critical because it’s the biggest volume driver for the purveyor of the boxer engine and symmetrical all-wheel drive. So what’s Subaru to do? Well, they’ve done the right thing: give the Forester a well-timed refresh to help it embrace a much more premium market position (without the premium price, of course).

Launched in 2013, the boxy Forester is a hold out against the increasingly sleek competition; and this is all for the better.  This year, it keeps that basic formula: an angular two-box silhouette but with some detail changes that tie it nicely to the brand’s new design language. The biggest change is found upfront with the new grille, bumpers, and lights. The grille itself still isn’t the hexagonal one found in the Legacy or Outback, but it does have sportier-looking mesh inserts. Next, the headlights have been upgraded with the signature “hawk-eye” daytime running lights along with LED beams that replace the old HID ones. The 2.0i-Premium and 2.0XT get the added benefit of swiveling units that move left and right according to steering direction. The bumpers on the Premium and XT are also shared with the fang-like design while the base model gets one with larger faux brake ducting. Peeping at each corner are new two-tone alloy wheels with the same measurements as before while at the back, the new taillights features C-shaped LED lighting and are vented to avoid moisture build-up (a common complaint on previous Forester models).

Anyone familiar with the current crop of Subaru vehicles will feel instantly at home in the Forester. The 2016 update builds upon the minor update last year and keeps items such as the multi-function LCD instrument panel, touch screen audio system, and the three-spoke steering wheel shared with the Legacy and Outback. This year, those changes are complimented by classier high-gloss piano black accents throughout the cabin and more leather inserts on the instrument panel center tray and door grips. A high-grade information display on the center console and powered front seats with memory further differentiate the Premium and XT models from the base 2.0i-L. In addition, thicker glass and more sound deadening also improve the interior quietness at the expense of a heavier curb weight. The normally-aspirated models gain 11 kilograms while the turbocharged XT adds a portly 28 kilograms.

As always, the Forester’s interior is very ergonomic. Despite being midway through its lifecycle, the cabin is easily one of the most driver-oriented ones in its class with a car-like driving position and easy-to-operate controls. Unlike its rivals which rely on either a slew of buttons or a complicated rotary controller, the Forester is straight-forward. The dual-zone climate control uses three rotary knobs while the infotainment system is on a large touchscreen above it. What’s more, there’s good space front and back for passengers, luggage, and knick-knacks. The stellar exterior visibility, a Subaru brand trademark, continues here thanks to the large glass area and side mirrors.

The only weakness to this crossover is the rather poor seat support. Driving it 560 kilometers on unfamiliar roads and on the “wrong side of the road”, it’s apparent that the seats don’t offer the same supportive bolstering found in other crossovers with a sporty bent. However, since these units are not from Japan, but from Tan Chong’s Malaysian assembly plant, they perhaps use different seating materials. A full test drive is needed before a definitive conclusion can be reached.

For the 2016 model, the Forester continues with carried over engines and transmissions. This means the normally-aspirated models use the 2.0-liter 4-cylinder FB20 engine with 150 horsepower and 198 Nm of torque. Despite its quoted acceleration times that remain at 11.8 seconds for a 100 km/h sprint, it feels taxed on the highways of Thailand. The Lineartronic CVT needs a split-second to adjust its ratios before any decent pace is achieved. It’s the same when attempting to overtake on a highway since the transmission needs to “kick down” before some semblance of power comes in. That said, when not being squeezed, it’s noticeably quieter with the characteristic transmission drone all gone. Plus, it’s actually capable of achieving speeds north of 150 km/h with enough road. In this drive, the 2.0i-Premium managed 9.09 km/L with an average speed of 50 km/h.

Of course, those who want even more performance can always opt for the 2.0XT that comes equipped with the 2.0-liter turbocharged and direct-injected 4-cylinder engine with 241 horsepower and 350 Nm of torque. It dispatches the century mark in a quick 7.5 seconds and should make the Forester much more responsive. This year, the high-torque CVT is tweaked, getting a revised transmission logic that mimics gear changes when the throttle is engaged above 35 percent.

While sheer pace hasn’t really improved much for this year, Subaru has worked to tweak the Forester’s ride via small changes to its chassis and suspension components. This starts with a stiffer front cross member that reduces chassis flex as well as optimized rear trailing bushings. The tweaks continue on to the shock absorbers, coil springs, and dampers too. The overall result is one that manages to be on the slightly sporty side while feeling less unbalanced over the rough stuff. The tweaks eliminate the hopping sensation over undulating surfaces while quelling the choppiness over smooth tarmac. The changes are mostly noticeable from the back seat where passengers feel much more at ease traveling long distances.

The changes done to the suspension system does affect the handling somewhat. Despite the quicker turn-in response (steering ratio is bumped up from 15.5:1 to 14.0:1), the Forester tends to roll and understeer through corners, especially when pushed. That said, it’s still stable and balanced as a quick trip through an on-road gymkhana and off-road autocross course proves. The brakes are also mighty responsive with excellent pedal feel and bite. The 2.0XT adds more handling spice courtesy of Active Torque Vectoring also found in the WRX and Levorg.

Those in the market for a 7-seater pickup-based SUV probably won’t be pursued by the changes done to the 2016 Subaru Forester. However, by embracing a more premium positioning, it can actually make the would-be-buyer question the rationality of that choice; maybe he doesn’t need to drive a lumbering ladder-on-frame SUV after all. Among its compact crossover peers, it stands out by being a stellar performer both on and off the road. And with the slew of changes done inside and out, it also gets that premium look and feel that helps it become the segment’s overachiever.