Following up their tire concepts at Geneva last year that focused on electric vehicles, Goodyear is now showing off what role tires could play with autonomous cars. At this year’s Geneva International Motor Show, Goodyear showed off two new tire concepts: the Goodyear Eagle-360 and Goodyear Intelligrip.

Both tires are designed with safety in mind which is a key concern among consumers around autonomous vehicles. In addition, it reflects Goodyear’s focus on anticipating the rapidly evolving needs of customers. 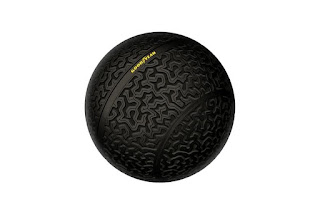 The Goodyear Eagle-360 looks like no other tire out there. The spherical-shaped concept would provide self-driving cars ultimate maneuverability (think of the Wil Smith film, I, Robot) while adding connectivity, and even biomimicry to the mix all to increase safety.

Maneuverability is a given thanks to the tire’s spherical shape. This allows the car to move in all directions, contributing to safety for passengers, as well as coping with space limitations such as light parking lots or city streets. However, sensors embedded in the tire add safety by allowing the tire to communicate road and weather conditions to the vehicle control systems and even nearby vehicles, while tread and tire pressure monitoring regulate even wear to extend mileage. The Goodyear Eagle-360 is also inspired by nature and mimics the pattern of brain corals and behaves like a natural sponge—designed to stiffen in dry and soften in wet conditions to deliver all weather performance.

Shockingly, the Eagle-360 tire will also be connected via magnetic levitation to suspend the car resulting in a smooth and quite ride for the passenger. 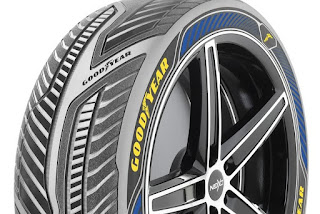 Next to the outlandish Eagle-360, the Goodyear Intelligrip looks much more run of the mill. But it manages to incorporate many of the technologies found in the Eagle-360 and could one day actually make it on the road (not in this form, obviously).

Embedded with sensors, the Goodyear Intelligrip is designed for use in autonomous vehicles. It communicates with the vehicle’s control systems, sensing road surface and weather conditions for improved safety. Custom algorithms allow it to sense a rainy or slippery road conditions and can allow the self-driving car to adapt its speed. Additionally, the tire can shorten the stopping distance and provide better cornering response.

Currently, Goodyear is working with several manufacturers to adapt the Goodyear Intelligrip system. Apart from detecting inflation pressure and tire temperature, Goodyear is aiming that it can communicate with other car systems such as the stability control, brake control systems, and suspension control systems.

Technology adaption: Goodyear is working with a number of vehicle manufacturers to further adapt this technology to their needs, enhancing connectivity with features such as Electronic Stability Control Systems, Brake Control Systems and Suspension Control Systems.
at 10:05 AM