The Nissan GT-R NISMO is Now Immortalized in LEGO 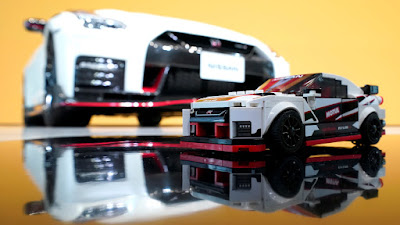 Here’s an interesting gift suggestion for all GT-R and NISMO fans out there: the first-ever LEGO set featuring Nissan’s supercar. Unveiled at Nissan’s headquarters in Yokohama, the 298-piece Nissan GT-R NISMO is part of LEGO’s Speed Champions line.

“The Nissan GT-R and the LEGO brand are both renowned and loved by fans of all ages throughout the world, and we are honored to be the first-ever Japanese car manufacturer to partner with the LEGO Group. Many of our Nissan customers can trace their automotive passion back to when they built LEGO cars as children. With this partnership, everyone can be a `takumi’ – the specialized craftsmen that build the GT-R. And, it’s the GT-R’s 50th anniversary this year, so what better way to celebrate than to share the GT-R with Nissan and LEGO fans around the world,” says Asako Hoshino, executive vice president at Nissan.

Even Mr. GT-R himself—Hiroshi Tamura gave his approval of this new LEGO set: “The GT-R has been part of my life since I was 10 years old. Working with the LEGO Group was like awakening my inner 10-year-old self to rediscover what makes the GT-R so special to me. It’s amazing how much the LEGO Group’s attention to detail reminds me of our own craftsmen.”

Sadly, for those who’re hoping to make this into a last-minute stocking stuffer this Christmas for Nissan fans, this Nissan GT-R NISMO set won’t be available until January 2020. Still, good things happen to those who wait because this is part of LEGO’s revamped Speed Champions line which is now 25 percent bigger than in previous years.
at 9:20 PM