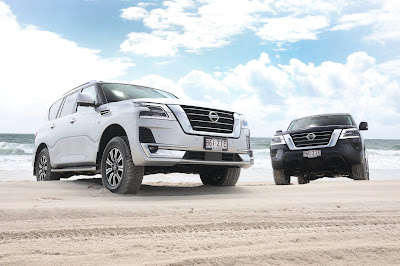 After its global debut in the Middle East last September, the new look 2020 Nissan Patrol has finally landed in the Asia & Oceania region. Offered first in Australia, the refreshed Patrol is offered there with two distinctive front-ends, one of which could show how the Patrol will look like when it lands in the Philippines in the first quarter of 2020.

Like its Middle Eastern counterpart, the new look Patrol features a new front- and rear clip for the Asian market. At the front, the hood, fenders, grille, and bumper have all been changed to give the Patrol a more upright appearance. Unlike its Middle Eastern counterpart though, the Asian-market Patrol comes with two looks. One is a more utilitarian one with less chrome and better approach angle, the Patrol Ti, while the other is a more premium one with an integrated front airdam and lots of bright work (Patrol Ti-L). At the back, the bumper’s made more upright and angular. LED lighting is now standard on both ends, too. At the front are 52 LEDs (plus LED fog lights), while at the back, are 44 LEDs. For the Australian market, 18-inch alloy wheels is standard, though it’s expected that the Philippine market will continue to get the larger 20-inch ones.

While the Patrol continues with its 5.6-liter V8 gasoline engine and 7-speed automatic (the 400 horsepower, 560 Nm of torque outputs are unchanged), it does benefit from a re-tuned suspension system for a more comfortable ride. The dampers now provide more dampening at higher piston speed (frequency) zone. Moreover, Nissan has also worked to improve the climate control even more for increased air flow around the cabin.

The refreshed 2020 Nissan Patrol is expected to arrive in the Philippine market by the first quarter of next year.
at 11:27 AM