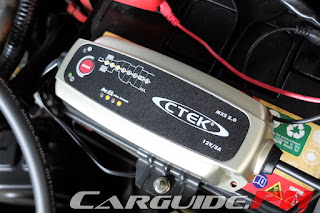 “Battery chargers are one of the least sexy car products out there,” quips Robert Briggs, Director of Sales and Marketing, Asia-Pacific for CTEK, the world leader in smart battery charging. And he’s probably right. Staring at the rows upon rows of car chargers on the table, admittedly, they’re all starting to look the same; perhaps with the exception of the additional button here and the extra cable there. And yet, for the next thirty minutes, Robert emphasizes why using a CTEK charger is as essential as checking your tire pressure every month.

“Purchasing a battery is a ‘hate purchase’,” says Robert. “You don’t think about it. It’s only when you try starting your car and it won’t start. From that point, you’re already pissed and that’s just because you have to buy a new battery.”

Indeed, CTEK understands this. With a market focused mostly on car enthusiasts and those with collectable cars in their garages, the company still sees majority of their sales in Western Europe. However, the Swedish company is looking at Asia-Pacific as the next area of growth.

As ever-smarter cars become the norm here, more and more strain is placed on the humble lead-acid battery. Indeed, pop the hood and chances are, you’ll find the same kind of battery from a decade or two ago, even if the modern car’s got fancier electronics.

Robert says that a vast majority of battery warranty problems stem from them being inadequately charged. By simply keeping them “topped up”, one can avoid all the hassle. This is where CTEK comes in.

Borne from an engineering-centric mindset, CTEK sees the intricacies of modern automobile batteries. Equipping their compact and powerful battery chargers with a unique intelligent microprocessor unit, CTEK chargers don’t just charge a battery. They condition batteries; enabling them to at least double their lifespan.

Take it from a satisfied user. Personally using a CTEK MXS 5.0, I have been able to expand my Subaru Forester’s battery lifespan to four years while other owners report having to replace their batteries at just after a year. In other words, the P 5,000 already paid itself twice over since the appropriate Motolite battery costs roughly the same as one CTEK charger. And I’m not even talking about my other car.

How does a CTEK battery charger do it?

Through the company’s patented 8-step recharging system, it optimizes the battery without stressing it out. What’s more, the entire thing is completely painless to use: just connect one end to the battery, the other to the outlet; select a button; and go. The CTEK charger goes through an automated sequence deciding what needs to be done. It can recondition the battery by returning lost electrolytes; and if necessary, alert you if the battery can’t take a charge.

Once the battery reaches its optimum charge levels, it will use pulsating charge to keep things topped off without overcharging it. During this mode, the battery is allowed to naturally discharge to a certain level before being charged again. Other chargers won’t be able to switch to this mode and this can cause overcharging. When a battery’s overcharged, it causes gassing, drying it out in the process. Rather than simply estimating a battery’s needs, the CTEK charger stays in constant communication, reacting and charging only when needed.

One of the best features of the CTEK battery charger is its ability to charge nearly every battery type available. This includes the common acid-lead batteries found in most automobiles, trucks, motorcycles, golf carts, lawn mower and boats, and can also charge deep-cycle, gel-cell and automated glass mat, or AGM batteries. And because this battery booster automatically analyzes the charge and type of battery you connect it to, you can charge the batteries of your vehicle without worrying about using an incorrect setting or overcharging your battery.

The CTEK’s line of car chargers include all the safety features such as insulated, spark-resistant clamps and an automated charging feature that is programmed to prevent overloading your batteries. It also features a reverse polarity warning light that turns on if you have placed the clamps on the incorrect battery post.

“While it is not truly equipped to be portable, the small, compact size of the CTEK car charger makes it easy to store and even install permanently in your garage or shop. CTEK’s patrons are usually showrooms, car collectors, fleet operators, and car/motorbike enthusiasts who want to maximize or prolong their battery life,” says Johann Tiu of CTEK Philippines.

Email ThisBlogThis!Share to TwitterShare to FacebookShare to Pinterest
Filed Under: CTEK Corporate, News