Driving Fun is an Exact Science for Mazda 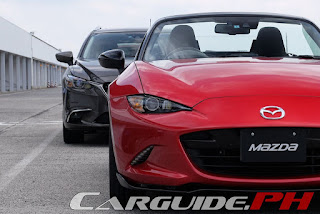 Mazda knows it’s not a large car company. The biggest ones in the world boast production numbers topping in the 7 million range while the Hiroshima-based carmaker does no more than 1.5 million. Yet, instead of obsessing with market share and volume, Mazda wants to develop a strong bond with its customers. In turn, this has become Mazda’s corporate identity; their irreplaceable presence in the motoring world.

The essence of every Mazda vehicle, from the diminutive Mazda2 to the venerable MX-5 is found in one simple phrase, “driving pleasure”. And for all the subjective connotations it can bring up (it’s an abstract feeling after all), delivering driving pleasure is an exact science for Mazda—one that brings back the childhood memories of learning to ride a bicycle for the first time. This heart-beating excitement is the same emotion they want in their cars. Ultimately, Mazda is building cars for people who cherish the feeling of movement.

To achieve this next level of driving pleasure, Mazda has done away with detailed competitor comparisons and benchmarking. Instead, they’ve adopted strict standards and created products built around one simple philosophy, the human body. “Human-centric Design Philosophy”, as Mazda calls it, has become their R&D focus and has one goal: to deliver an impressive experience for customers. It’s about making cars that adapt to the driver and not forcing the driver to adapt to their car.

At the root of all this is Jinba-ittai—something Mazda has emphasized countless times. This “oneness of horse and rider” originates from medieval Japan with horseback-riding archers called Yabusame. With both hands concentrated on the bow and arrow, these archers have to control the horse by means of subtle body movement alone. This inseparable bond between horse and rider is the same feeling Mazda wants in their cars.

It’s a common misconception that Jinba-ittai is just for the sporty or enthusiastic driver. On the contrary, it works even for every day driving when it’s important that the driver feels their car’s responses and be able to smoothly react to it. And though Mazda has developed cars with an emphasis on the driver’s senses for some time, engineers weren’t able to rationalize what made drivers feel that way. Through repeated assessments and tests though, Mazda has now gained a systematic understanding of what makes a driver perceive a car as an exhilarating drive.

At the core is a natural and relaxed posture. Looking at a baseball batter (or even a Kendo practitioner) as an example, no force is applied to the joints. Yet, they can strike with precision and immediacy in no time. Similarly, a driver must be relaxed, but can react immediately when needed. More importantly, such a position can be maintained for long periods without fatigue. Engineers have gone through great lengths measuring joint angles and muscle conditions of people in a relaxed posture. And after identifying what the ideal driving position is, Mazda then placed the vehicle controls in locations that enable and promote this posture.

More than just the right seating position, the human-centric design philosophy extends to having the car operate completely as the driver intended. The driver operation must completely match the car’s reaction to the level that Mazda considers as instinctive or “unconscious”. This is seen through the smooth transition during cornering, taking into account the subtle hand and body movement of the driver.

By focusing on the driver and his sense of oneness with the car, Mazda has developed its unmistakable driving feel. Engineers still use theoretical numbers, but they always back everything up with actual human senses. This human-centric design philosophy lies at the heart of every car that comes from Mazda and one that’ll dictate all future models moving forward. The pursuit to Jinba-ittai is a never-ending journey, but it’s one that creates an inseparable bond between car and driver that ultimately results in Mazda’s fun-to-drive feel.