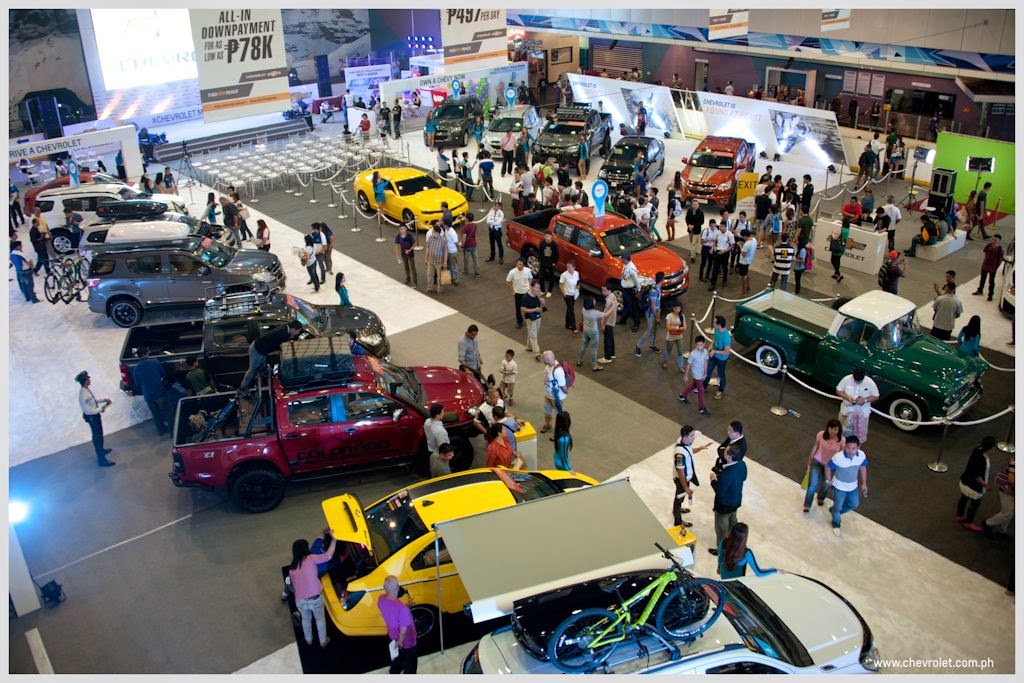 Chevrolet Philippines – The Covenant Car Company, Incorporated rocked the SM Mall of Asia for the 5th time in a row as thousands of Chevy enthusiasts herded to the 2014 Chevrolet Motorama event last October 9 to 12. Showcasing the American automobile brand’s constantly evolving products, passion and creativity in engineering great automobiles, auto fanatics both young and old experienced the Bowtie brand in Chevy’s grandest motorshow event of the year.

“The Chevrolet Motorama 2014 is particularly significant for us at the Covenant Car Company Incorporated because it also marks our 5th year as Chevrolet Philippines. This annual event allows us to engage with our audience by showcasing Chevrolet’s brand heritage, the exciting cars we have on offer and the array of high quality Chevrolet products and services. It is a great opportunity for us to touch-base with our customers – a place where our patrons can experience the Chevrolet difference,” says Lyn M. Buena, Senior Vice President and Director, Marketing Services Division of The Covenant Car Company Inc. (TCCCI)

TCCCI announced that sales for the Chevrolet brand has grown by 41 percent on average each year since it began operations in October 2009. To date, TCCCI has sold more than 20,000 Chevrolet vehicles in the Philippines, rising from the 12th spot in 2009 to eight overall in the market. They also posted a record-setting performance with a total of 5,954 units sold from January to September 2014, a 73.5-percent gain over the same period last year.

Leading the show was the first ever Transform Your Ride: Chevrolet Dealer Build-off competition. Showcasing Chevrolet customization at its finest, the Transform Your Ride challenge succeeded in gathering an array of 16 customized Chevy entries from 14 Chevrolet dealerships. Participating dealerships from Luzon, Visayas and Mindanao poured all their passion and creativity in ‘modding’ up the coolest Chevy rides which were showcased at the event. Chevrolet Philippines will be awarding several awards such as the ‘People’s Choice award,’ wherein attendees will be given the chance to cast their vote for their favorite entry,  Best in engine bay modification, Best in Paint, Best in Body Customs, Best in Sound Set-up and an overall Best in show award as the grand prize.

The Chevrolet Motorama became the ultimate Chevy Motorshow in the country as the brand exhibited classic Chevrolet trucks including a 1918 Chevrolet Light Delivery “Cowl Chassis,” which was the very first truck variant that Chevrolet has ever built, a 1955 Chevrolet Pickup, which marked Chevrolet’s advancement in design and the all-time American Muscle car- the Chevrolet Camaro.

Also taking the stage were the latest line of Chevrolet automobiles which includes the All-around Utility Vehicle (AUV)- the Chevrolet Spin, the mid-size executive sedan that lets you want what you need- the Chevrolet Malibu, the power packed Turbo-diesel pickup truck- the Chevrolet Colorado, and the award-winning and best-selling Chevy mid-size  SUV- the Chevrolet Trailblazer.

Cool and Easy to own Chevys

To cap off the dazzling exhibit, the newly refreshed Chevrolet Captiva and Chevrolet Sonic LS variant made their debut and took the Motorama stage by storm with the coolest Chevrolet ownership promos.

Exuding a commanding presence with its signature dual port grill with the iconic bowtie insignia at its center, the newly refined 2014 Chevrolet Captiva 4x2 with Diesel engine is capable of producing a maximum of 161hp and 400Nm of torque that provides impressive power and acceleration for overtaking maneuvers and climbing steep and challenging roads. The Chevrolet Captiva Diesel starts at 1,398,888.00 with a special All-in low down payment promo of 128,000.00.

Apart from its sporty exterior design, the Sonic sub-compact sedan is equipped with a 1.4L ECOTEC engine that offers dependable power and reliable engine performance. The Sonic now comes with a new LS variant that is offered for as low as Php 678,888.00. Other special sales promotion options at the Chevrolet Motorama are Php 20,000 cash discounts on the Chevrolet Colorado.

With gimmicks, test drives, events, competitions and giveaways happening non-stop, the 2014 Chevrolet Motorama became a one-of-a-kind event that brought the Bowtie brand and its loyal customers together to enjoy their own Motorama moments.
at 6:58 AM