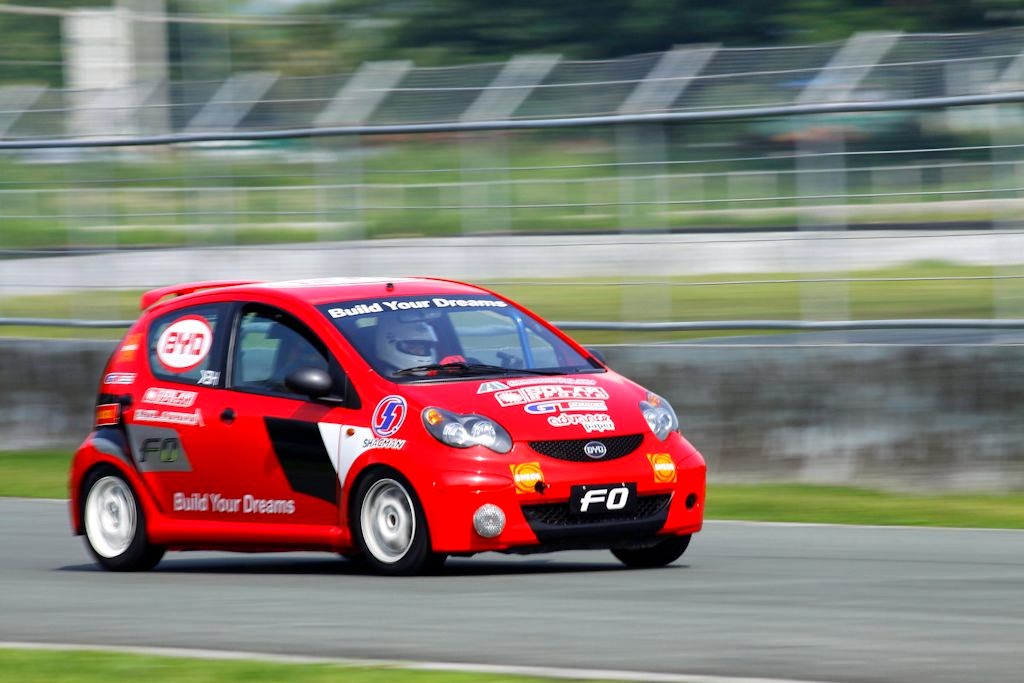 The BYD F0 driven by Keith Bryan Haw proved unbeatable in the last leg of the Micro Series category of the Circuit Showdown also known as the “Circuit Final Showdown”, when it dispatched its main challengers, the Toyota Wigo driven by Mark Peter Thomann and the Suzuki Capuccino piloted by Mackie Cañete on the challenging Clark International Speedway in Pampanga.

During the Time Attack, the BYD F0 powered by a three-cylinder, 1.0-liter BYD 371QA engine, seized pole position by consistently posting lap times of two minutes and 39 seconds (2:39), more than three seconds quicker per lap than the rest of the micro series. No modifications were made on the F0 engine except intake headers exhaust. Under the rules, the Micro Series category could only use ’14-inch GT radial street tires. In the Grid Race, the BYD F0 stormed ahead of its class rivals and even passed some of the powerfully-modified cars such as the Toyota Corolla and Vios, Mitsubishi Lancer, Honda Jazz  and Civic to secure its first ever win on the racetrack.

“When I moved ahead of Mark’s Toyota and Mackie’s Suzuki, I decided on driving a tactical race by being consistent enough to finish in front of them,” Haw shared. “As the race progressed, I was surprised by the fact that I was catching and passing some of the Grid D cars, which were supposedly much faster than my BYD F0.”

Haw added, “The car performed flawlessly—its engine didn’t skip a beat and the obedient handling made steering it around Clark so effortless. All I had to do was stay out of trouble and it paid off. I must thank the entire BYD team for putting together such an excellent effort and, more importantly, I am grateful to my best friend and BYD boss, Mark (Tieng), for giving me this opportunity to show what the BYD F0 can do on the track.”

“The BYD F0’s win exceeded all my expectations for the car. When we finished second on our maiden outing a few months back, I was elated. With today’s win, I was totally blown away. My hat’s off to everyone on the team for doing a great job and for showing everyone here just how competitive our world-class product is against the more established automotive brands,” said Mark Tieng, BYD Philippines managing director.

The BYD F0 come in three variants: GL- AT which is priced at P628,000; GLX-i MT at P548,000 and the G-i MT at P468,000. In the Philippines, BYD is distributed by Solar Transport and Automotive Resources  (STAR) Corp. The company’s cars can be viewed in its showrooms, BYD Shaw Boulevard, located along Shaw Boulevard in Mandaluyong and BYD North EDSA.
at 8:36 PM