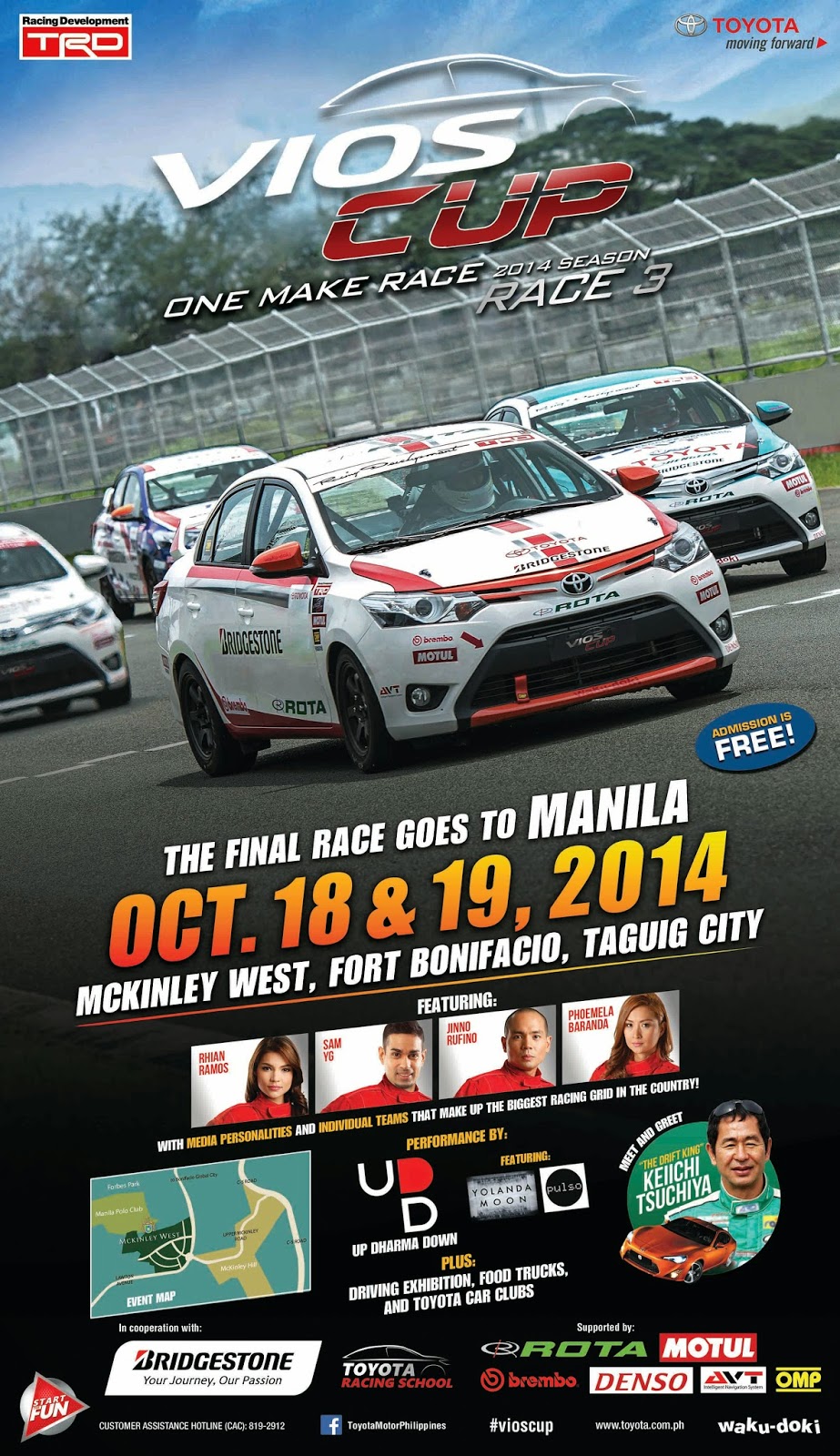 Toyota Motor Philippines (TMP) is all set for the Vios Cup Season’s 3rd and final race! TMP’s grand dream of bringing the much-talked about motorsports festival closer to the public will finally happen on October 18 and 19 as we move our race to McKinley West, BGC, Taguig City! Let the number one automotive company in the country bring you a fun-filled program and heart-pounding excitement that has already redefined motorsports in the country!

From a record of 30 Vios Race Cars lined up at the track last race, seven new entries will be added to the largest grid in Philippine motorsports history. Now, a total of 37 race cars for the final leg will be divided into two grids or brackets based from the results of the Qualifying Round scheduled on October 18 and race proper the following day. Moreover, champions from the previous legs’ Media Class will race under Media All-Stars category together with Celebrity racers who will surely battle it out wheel-to-wheel to take the honor of being the best in their class! With this, fans can expect a more action-packed race as competition is expected to level up with all teams gearing up for this final and much anticipated leg that will happen here in Manila!

Despite the rain on the 2nd heat of the previous race last July, Vios Cup racers proved that whether rain or shine, they can exemplify racing skills on those heart-stopping drifts on the wet track. ­­­Jason Choachuy racing for Toyota Balintawak once again emerged as the winner for the first and second heat scoring a huge strategic point advantage in the 3-leg race series making him the top seed for the Manila Race.  However, the point system for this final race will double up, which gives everyone a final opportunity to improve their Championship standings for this 2014 Race Season. The racer who will get the highest cumulative points (with deductions implemented by AAP) from the first to the last official race will be declared the overall season champion. Aside from his or her bragging rights, he or she will receive a brand new Vios (1.5G M/T)! Meanwhile, the 2nd placer will get P400,000 and the 3rd placer will receive P200,000.

TMP has prepared another full-day program and other side activities such as Track Day competitions and fun outdoor games suited for all ages. Feel the rush of adrenaline as one of the stars from the movie hit “Fast and Furious” returns to once again showcase exclusive drifting exhibitions for all racing fanatics! Be in awe as the Drift King, Keiichi Tsuchiya, show you some live Tokyo Drift as seen in the movie!

To wrap up this weekend-long festivity, TMP will be lining up various OPM bands that will rock this season’s final race! Watch and let your world be rocked by live free concert by Pulso, Yolanda Moon and the most awaited performance of Up Dharma Down! Get ready to witness the biggest Motorsports Festival in the country! Mark your calendars and experience a fun and exciting weekend at McKinley West, Fort Bonifacio, Taguig City on October 18 and 19, 10:00AM. This event is open to the public, and admission is free!

The 2014 Vios Cup is in cooperation with Bridgestone and supported by Rota, Motul, Brembo, Denso, AVT, OMP, and TRD.
at 7:00 AM