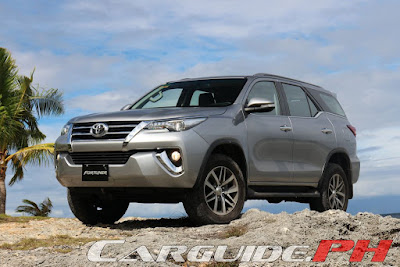 There are people who’re blindly loyal to the Toyota Fortuner and there are those who’ll end up buying one anyway. Such is the power of Toyota’s Pickup-based Passenger Vehicle or PPV since its market introduction in 2005. It has revolutionized the industry, offering an American-style 7-seater mid-sized SUV for the price of a compact crossover. And though some of its competitors offered a good fight, the Fortuner remained the top choice whether or not it was considered matagtag (stiff riding) or not. Now that a second generation model is upon is, is the 2016 Fortuner all that you wanted? More importantly, is it still matagtag?

Getting straight to the point and answering the second question first, yes, it’s still matagtag, but not on the same messy level as the first-generation model. There’s only so much you can do with the same suspension set-up (Double Wishbones at the front, 4-Link with Coil Springs at the back), but thankfully, the low speed discomfort has been largely quelled. It still has a propensity to hop up and down on small, undulating bumps, but at least the passengers themselves don’t bob up and down in unison. Undoubtedly, more damping and cabin insulation helped here.

While the low speed ride seems to have remained the same, the mid- and high-speed ride does see a substantial improvement. The stiffer structure not only contributes to better stability, but it also manages to keep the cabin largely level even during cornering. This minimizes the boat-like sensation keeping the passengers comfortable even on long drives. Toyota has reiterated that the Fortuner’s frame rails are as thick as the Land Cruiser Prado’s and it’s pretty evident when riding over the rough stuff. With a drive route that’s 50 percent on-road and 50-percent off-road, it glides over almost any obstacle. Even an abrupt road cut won’t unsettle it.

From behind the wheel, it feels surprisingly the same as the outgoing model, especially at low speeds. It still feels slow though corners because of the hydraulic power steering, though it’s quieter and smoother now. With sharp cuts filtered through the cabin much better, you do get the sensation of a better drive. On higher speeds, the chassis and suspension reveal a much more confidence experience. It’s still not sporty, but it’s now more adept at handling corners with controlled body roll and surprisingly, better modulation from the brakes.

After answering the question about the Fortuner’s ride, let’s now tackle the first question: is it all you wanted? The answer isn’t as straightforward as you think, but it’s one hell of an improvement from before.

With two variants priced at P 1,476,000 and P 1,736,000, the 4x2 will likely make the bulk of Fortuner sales (the 4x4 V is probably prohibitive for most). For that, you get the services of the 2GD-FTV engine. With a displacement of 2.4-liters, it has 147 horsepower and 400 Nm of torque—figures which are pretty close to the outgoing 2.5-liter. Though paper specs don’t sound encouraging, there’s considerable pep from the get-go. It’s also remarkably quiet at low revs, quieter than most German diesels. However, as the revs climb, so does the diesel clatter. Thankfully, the 6-speed is well-mated to the engine, keeping the revs down and comfort levels up.

The improved refinement is pretty much synonymous with the rest of the car. Even when driving the 4x2 G (the exterior photos are the 4x4 V), the cabin is a nicer place to be in with consistent fit and finish throughout. The two-tone hue—black and dark beige—is tastefully done, though the “zebra pattern” on the partial fabric seats takes some getting used to. The best touch though is the patches of leather dotting the cabin from the dashboard to the knee bolsters. This gives the Fortuner a notch-above look and feel. This impression extends to the nicely textured and soft (slightly) plastics and the matte wood trim.

The driving position is still somewhat truck-like though the tilt/telescopic steering wheel does ensure a better reach. The instrument cluster is familiar to those who’ve seen the latest Toyotas of late, though in the Fortuner, there are two blue vertical stripes that separate the large tach and speedo. The front seats are much improved with better support, especially in the bolsters and cushion. Meanwhile, the second row still folds and tumbles in a 60/40 split. The one-touch tumble mechanism allows easier access to the third row seating. Like the previous model, it still folds to the side, but the spring loaded mechanism and rear mounted latch point makes it easier to store.

Stepping out, the verdict on the styling remains split. Some people prefer the angular look of the old model to the swoopy look of the new one. Still, there’s some crossover-vibe going on here and for that, it looks much more modern than ever before. It’s also a head-turner thanks to the trademark “floating” roofline and slimmed down lighting elements front and back.

By all accounts, the 2016 Toyota Fortuner isn’t as perfect as you think, but a longer drive is necessary to find out whether or not you’ll warm up to what’s looking to be its weaknesses. That said, there’s no denying the improvements it has made on all fronts. Regardless of what you think, it will remain the top choices of the every man out there. Though the Innova remains the more practical choice for those with families, some have actually come to embrace the all-conquering motto of the Fortuner. “The World is Mine” aptly applies not only for Toyota, but for better or worse, Fortuner owners as well.