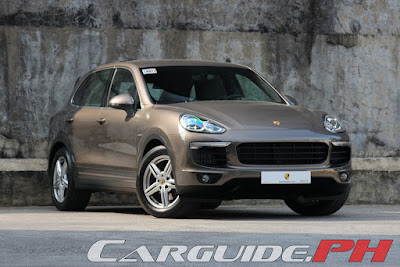 Die-hard Porsche fans must have screamed in horror when the Cayenne first launched in 2002. But over the years, it has become accepted, turning into one of the brand’s best-selling models and unashamedly the reason why Porsche could make even better 911’s. Some 13 years and a model generation later, Porsche has tweaked and polished the formula delivering the same technical tour-de-force you’ve come to expect out of Stuttgart’s stable. And just as fans have warmed up to it, Porsche plops in a diesel; a diesel-powered Porsche SUV? Sacrilegious? Hardly.

As a company, Porsche has always valued technical engineering and know-how. Though they’ve been stubborn with the whole rear-engine, rear-wheel drive formula for quite some time, they have tried a lot of things from a front-mounted V8 grand tourer, a loony twin-turbo all-wheel drive sports car in the 1980’s, and more recently, a big, honking sedan with plug-in hybrid tech. In all these cases, technology is the main driver of performance. The Cayenne Diesel is pretty much the same thing.

Despite shared underpinnings with other members of the Volkswagen family, the Cayenne gets its own unique exterior treatment. The low hood line and rounded headlights clearly identify it as a member of the Porsche family; ditto the curved and sculpted lines at the side and rear. Like the sports cars whose heritage it’s tapping on, it’s clean and clear of any tacky handles and creases. It’s all about the smooth, flowing lines. The minor revisions, done in 2014, add even more presence thanks to the new bumpers with modified air intakes. The striking four-quadrant LED daytime running lights further punctuate the front-end. On all four corners, it appears it’s sporting small alloy wheels, but those are actually 19-inchers shod with 265/50R19 Goodyear Eagle F1 SUV tires.

Ever since the Panamera, Porsche has hit sort of a cabin renaissance, coming out with interior that finally befit their price tags. The Cayenne has that high-quality look and feel as well. With an overall length of 4,855 millimeters and a wheelbase of 2,895 millimeters, it’s abundantly spacious inside given Porsche has resisted the temptation to add a token third row. The luggage space is also huge (maximum of 1,728 liters) and can swallow pretty much anything you put in there. Like any other modern Porsche, the Cayenne features a high center tunnel that engulfs the shifter all the way to the touchscreen infotainment system. The endless array of buttons may look confusing at first, but given how the buttons are all clustered by functions, it’s surprisingly easy to understand.

The rest of the driving environment tells the same story. Despite the tall seating, the driver is treated to a sports car-like driving position because of the supportive seats, 918 Spyder derived small three-spoke steering wheel, and the trademark five-tier layered instrument cluster. The ignition on the left-hand side completes the feel.

Of course, when it comes to cranking this particular Porsche to life, twisting the ignition won’t result in a burly exhaust note or a cacophony of flat-6 power. Instead, you get a 3.0-liter turbo diesel V6 with 245 horsepower and 550 Nm of torque. From the outside, it’s already smooth and quiet, but inside, it’s even more so; a testament to the Cayenne’s excellent NVH insulation. Despite having to pull 2,110 kilograms, it feels surprisingly lithe. Zero to 100 km/h comes in at a un-SUV-like 7.3 seconds. The bigger news though is in-gear acceleration: 80 to 120 km/h is done in just 5.3 seconds. The 8-speed automatic is unobtrusive and extremely quick to respond, challenging any notions that a two-ton SUV can’t be sporty. Average fuel economy is 6.64 km/L in heavy and 12.5 km/L in light traffic.

Great in a straight line, Porsche seems to have made a pact with a higher force and have transformed the Cayenne Diesel into a proper cornering machine. It feels smaller than its size suggests and on more than one occasion, it belittles its girth with great agility and poise during cornering. You think SUVs don’t handle? The Cayenne easily disproves this with its commendable steering feel and handling precision. In addition, the ride doesn’t seem to suffer even one bit. It feels plush and smooth through any terrain making it the perfect Porsche to tackle Manila’s roads. With a standard torque split of 40-percent front and 60-percent rear (it can transfer available torque to the set of wheels with the most traction), it’s one all-weather capable automobile. Plus, it’s not a pretentious SUV that can’t off-road. Looking at the buttons near the shifter reveals something of an off-road command center that changes mapping to all relevant systems including ride height and power distribution all at the touch of a button.

Designed as an integral part of the Porsche family, only time will tell if it’ll reach the same cult status as its sports car brothers; but the immediate concern for the Cayenne’s critics should be laid to rest. Critics should put cynicism aside and look at it for what it is: a ground-breaking, mud-plowing, and surprisingly practical sports car. Of course, some will never accept a sports car that doesn’t have the driven wheels at the back along with a two-seater, two-door layout. But Porsche has always gone against the grain. The Cayenne has become the quintessential “up yours” in the face of traditionalists.