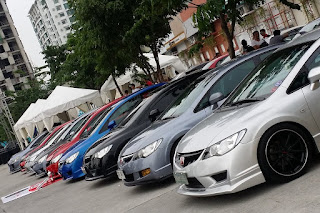 The Honda Civic Club 10th anniversary celebration was headed by Team FD Philippines, one of the official subgroups of Honda Club of the Philippines (HCP). In this year’s celebration, a total of two hundred eighty seven (287) guests attended the event – eighty-three (83) of which joined the car show competition, while twenty-two (22) participated in the car display.

All attendees took part in the celebration to share their common affinity and enthusiasm for the eighth generation Honda Civic. The car show and car display participants eagerly showcased their modified and accessorized Civic vehicles, which also allowed them to embody their love for the Honda brand.
In this year’s celebration, Mr. John Moreno’s eighth generation Civic was awarded “Best of Show” for presenting originality in the design and upgrades he developed for his Civic. The use of Honda genuine accessories, parts, and engine truly made Mr. Moreno’s Civic even more distinctive. The attendees further expressed excitement with the recent launch of the tenth generation All-New Civic, which was also on display during the event. According to the Group Head of Team FD Philippines, Mr. Jess Miano, “It is a one of a kind tenth generation Civic. Comfort and performance are what our members look for.”

HCPI extends support to HCP as they continuously aim to organize and implement activities, programs, and projects, to foster respect, camaraderie, and teamwork with every member.

HCP is a non-profit, non-stock organization where members share common knowledge and passion about Honda cars. The members’ common interest brought about the growth of the organization in the past ten years, which they continue to develop further in the coming years ahead.
at 8:47 AM