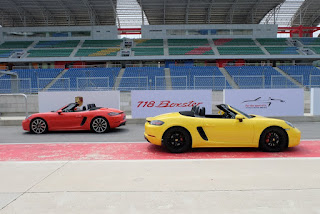 First appearing in 1996, Porsche’s mid-engine Boxster quickly captured the imagination and fancy of performance seekers already aware of the values of the Stuttgart-based supercar maker. The Boxster made an instant connection to an adoring public with its athletic build and a matching visceral performance – not to mention the fact that it afforded an unmistakable sense of freedom as a roadster. Not since the Porsche 550 Spyder of the 1950s had the carmaker primarily envisaged a vehicle sans top. It was, and still is, about “taking the offensive… not least on the racetrack.” Indeed, the 550, according to Porsche, “defied the motorsport standards of the time.”

Now on its third generation – with the first unveiled in 1996 – the iconic Boxster received a significant refresh with the recent release of the 718. The new iteration banners two new turbocharged flat-four engines with displacements of either 2.0 or 2.5 liters (for the S variant) good for 300 horsepower and 350 horsepower, respectively.

Porsche Center Philippines representatives, led by president Roberto Coyiuto III, flew to South Korea to experience the 718 firsthand on the pristine Inje Speedium race track. Along with other Asia Pacific dealers of Porsche, Coyiuto and company also participated in product and communication workshops to know everything about the new Boxster. General sales manager Dave Gomez gushed: “It’s a very powerful car, with everything you expect from the Boxster and, of course, a Porsche.”

There is an array of changes over the outgoing model, such as redesigned front and rear four-point LED lighting, sportier side mirrors, and new front grille and bonnet that imbue a sharper and wider look. Rear wheels have been enlarged by half an inch in width to improve grip. Giving the shell of the 718 both strength and lightness is a composite of aluminum and steel parts.

Commensurate with physical changes are cutting-edge technologies that tie in to the mantra of Porsche Intelligent Performance. For instance, Variable Turbine Technology (VTG) is put to work to make turbo lag at lower engine speeds virtually a thing of the past. In the case of the Boxster S, the 2.5-liter realizes a bulk of its 420 Nm within the 1,900 to 4,500 rpm band. Peak power is achieved at 6,500 rpm for both variants. While working to increase performance, Porsche engineers made the 718 Boxster (and sibling Cayman) more fuel efficient and eco-friendly.

The Boxster possesses dynamic cornering ability because of a low and ideally located center of gravity – helped along by the fact that the engine is positioned about a foot behind the driver. The power is directly transmitted to the rear axle. Meanwhile, the vaunted Porsche Stability Management (PSM) is a fail-safe that stabilizes the vehicle in hazardous road situations. An electronic control system uses sensors to continuously monitor the direction, speed, yaw, velocity, and lateral acceleration of the vehicle. When accelerating on inconsistent road surfaces, PSM enhances traction.

Inside, the Porsche Communication Management (PCM) system now features Apple CarPlay so an occupant can pair an iPhone with vehicle to use and access apps. A voice control system can now be used to make phone calls. At the heart of the system is a seven-inch multi-touchscreen on the center console.

The 718, like the new 911, derives its beautiful sports steering wheel from the legendary 918 Spyder, and features among its controls an optional new mode switch that allows the driver to cycle through driving modes, and engage the Sport Response function. Pressing a button immediately primes the engine and transmission for the quickest possible release of power for approximately 20 seconds. A timer graphic appears on the instrument cluster.

A compelling mix of excitement, performance, luxury, and everyday drivability, the 718 Boxster further improves the timeless roadster while delivering everything expected of the hallowed brand of Porsche.
at 8:53 AM