After releasing the results of its Customer Service Index or CSI study last July, JD Power is now releasing the results of the Sales Satisfaction Index (SSI) study. And among the 11 mass market brands in the industry, Toyota ranks the highest in new-vehicle sales satisfaction. This marks the third year that Toyota has topped the survey. Meanwhile, Isuzu ranks second and Kia third (the full results are available below).

The 2016 Philippines Sales Satisfaction Index (SSI) Study is based on responses from 1,679 new-vehicle owners who purchased their vehicles from August 2015 through April 2016. The study was fielded from February through June 2016.

The study finds that the proportion of women buying new vehicles has steadily increased in recent years to 45 percent in 2016 from 31 percent in 2013. While overall satisfaction among men and women is nearly the same, trends for women are on the decline (758 on a 1,000-point scale in 2016, down 7 points from 2015) while those for men are going the other direction (757 in 2016, up from 752). This should be a concern for automakers and dealerships, as more and more women are purchasing new vehicles.

The study also finds significant differences in the shopping behavior between women and men. Women rely more on recommendations from friends, relatives, and other owners of the same make, while men tend to spend more time on the Internet researching performance features and technical specifications. Additionally, only 7 percent of women visit a dealership alone—the others are accompanied by a friend or family member—compared with 21 percent of men.

However, what is similar between the two genders is that the majority of both women (91 percent) and men (88 percent) say they knew the exact car model or make they wanted to purchase prior to visiting the dealership.

“As more women are buying cars in the Philippines, dealers have to understand that what may appeal to men in the shopping process may not resonate with women,” said Loïc Péan, senior manager at JD Power. “Satisfaction is critical since willingness to recommend and repurchase is more than double for customers who are highly satisfied.”

Further, the study finds that female salespeople are more effective in engaging with female customers, as they exhibit more empathy and concern for their needs. Satisfaction is higher among women who are served by female staff than among women served by male staff (777 vs. 754, respectively).

“The problem at dealerships is that there are too few female employees on the showrooms to cope with the increasing number of female shoppers,” said Sigfred Doloroso, country manager at JD Power. “Female salespeople have the edge in making the emotional connection with women, as they help to make car shopping less intimidating for them.”

Following are additional key findings of the study: 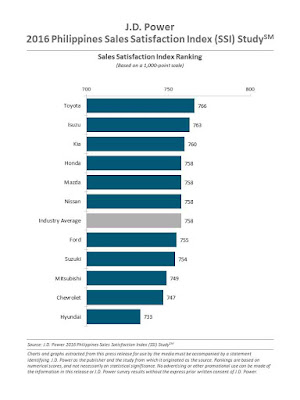