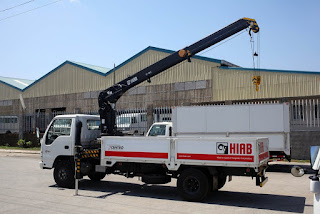 The logistics industry in the Philippines will continue to grow with the growth driven by express delivery, third party logistics (3PL) and e-Commerce. Another study by Logistics Services shares the same optimism and provides a comprehensive analysis of the various aspects of the market such as the market size of logistics, express delivery, freight forwarding, third party logistics, e-commerce logistics, balikbayan boxes, warehousing and value added services. The report also covers the major express logistics players in both international and domestic markets along with their share in the revenue.

Both reports present a rosy picture and point to a sustained growth in the logistics industry in the Philippines. To support this growth, Centro Manufacturing Corporation, the country’s leading truck body builder, is introducing its new line of truck-mounted cranes, tailgate lifts, column lifts, wing vans and aluminum composite panel vans.

“We will showcase our logistics products at the upcoming 6th Philippine International Motor Show”, says Centro Senior Sales Manager Vic Belisario. “We aim to be your one-stop-shop for all your requirements for water-tight truck bodies and truck-mounted equipment”.

The Philippines has been one of the fastest growing economies in the ASEAN region during the past five years. With an improvement in economy which has been facilitated by an increase in trade, the country plans to achieve more than 6 percent GDP growth rate in the coming years.

Variables such as service industry, manufacturing sector, exports and imports along with foreign direct investments and personal disposable income have impacted the logistics market in the Philippines. 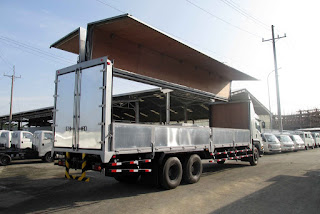 The growth of gross domestic product from P 8,206.1 billion in 2009 to P 12,642.7 billion has acted as a strong indication of the growth of the Philippine economy. Logistics has played a crucial role in the Filipino economy with a contribution of around 10 percent to the GDP in the year 2014. In order to support the rapidly growing logistics sector, the infrastructural expansion in the country has showcased steady progress during the review period of 2009 to 2014. The domestic express delivery market has been the upcoming segment in the Philippine logistics market.

Express delivery which comprises of services for documents, mails, parcels and couriers at a premium price for faster delivery times has gained significant popularity among Filipino companies.

The study adds that companies such as 2Go, LBC Express, PHL Post and Air 21 have been a few of the prominent names in the domestic express delivery market. The domestic express market has witnessed a number of collaborations of domestic companies with international entities. The competition among the players has been limited due to the presence of major players who have dominated the industry due to the development of high brand value and a sense of security among the Filipinos.

Belisario points out that express delivery companies will benefit from Centro’s Zepro tailgates and Del column lifts supplied by Hiab/Cargotec, Europe’s leading crane manufacturer. They eliminate the need for a driver’s helper to deliver heavy items to be lifted onto the truck. “Tailgate and column lifts therefore require less muscle to do the same job. These are already standard truck equipment in delivery trucks in developed countries. And we aim to make it popular in the Philippines as well”.

”For even bigger cargoes, Centro now introduces for logistics companies its wing vans which can conveniently load goods from three sides at a faster rate”, he says. “It can then be automatically folded to secure the cargo. Since time immemorial, wing vans were only available second hand. Now, it is available brand new from Centro for any truck brand and model of your choice”
at 7:00 AM

Email ThisBlogThis!Share to TwitterShare to FacebookShare to Pinterest
Filed Under: Centro Corporate, News