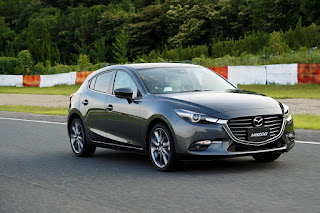 In 2012, Mazda has created an encompassing suite of technologies under the Skyactiv brand. These three elements: Engine, Drive (transmission), and Body are all responsible for Mazda’s fun-to-drive renaissance of late. Though found in every sixth-generation model, Mazda realizes its limitation: they work and operate independently of each other.

Conventionally, the engine and chassis operate separately and systems like torque vectoring and stability control would only kick in when the car reaches the limits of its safe operation. For Mazda, this reactive behavior doesn’t result in a unified driving feel. Despite being able to keep a car pointed in the right direction, it can feel like the driver is being nannied at times.

The mission of Skyactiv-Vehicle Dynamics is to create a driving environment that’s consistently effective over a range of driving situations from low-speed everyday driving to high speed enthusiastic driving to even emergency situations. Typical of the company’s “defying convention” mentality, Skyactiv-Vehicle Dynamics unifies the engine, transmission, and body control into one cohesive and proactive package that allies to the company’s human-centered philosophy. Not only is Mazda gunning for mechanical efficiency, but also imagines how a vehicle should behave in consideration of its driver.

The first part of the Skyactiv-Vehicle Dynamics is G-Vectoring Control or GVC. The idea behind GVC is revolutionary: it uses the engine to enhance the chassis response. It does this by adjusting engine torque in response to steering inputs. GVC controls both swaying and pitching motion—something that hasn’t been done before. This makes the car move more precisely as the driver intended, reducing the need for steering corrections, many of which are performed unconsciously.

GVC works the moment the driver starts to turn the steering wheel. This generates a deceleration force, shifting load to the front wheels. This increases front-wheel tire grip, enhancing the vehicle’s turn-in response. After that, when the driver maintains a constant steering angle, GVC immediately recovers engine torque which then transfers load to the rear wheels enhancing vehicle stability. This series of load transfers actually extract more grip from the tires, improving responsiveness and stability. And not only does GVC reduce steering inputs, it also provides better control and traction in poor road conditions such as rain or snow. It improves passenger comfort by reducing the unnecessary swaying motion—the most common cause of car sickness.

One of the key features of GVC is that it enhances a natural driving feel by offering quicker and more precise control. The reaction time of the system is faster than a person can perceive. The resulting deceleration force is usually just a subtle 0.1 G (minimum is 0.01 G and maximum is 0.5 G).

The beauty of GVC is its high deployability among the Mazda line-up. Purely a software control system, GVC does not carry any weight penalty. In addition, it can easily be deployed regardless of drive system and vehicle type. Mazda engineers have actually said that most of its new-generation models will receive GVC starting with the 2017 Mazda3. And though it works best on an OEM set-up, GVC will not affect those planning to run an aftermarket set-up. It can be made to adapt to a new set-up when necessary with no intervention from the driver.

Mazda has always aimed to offer vehicles that provide driving pleasure. It has done so through the pursuit of Jinba-ittai, the feeling of unity between driver and car. Whether turning, braking, or simply cruising, the driver should be able to control the vehicle naturally and easily as if it were an extension of his body. The newly launched Skyactiv-Vehicle Dynamics is the next step towards achieving that goal. It continues on Mazda’s path of delivering a human-centric development philosophy.