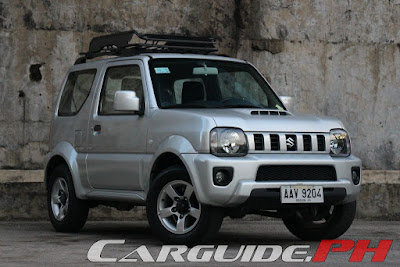 I’m not saying you should fall in line and buy yourself a Jimny; on the contrary, I’m telling you to avoid it completely. If you have any shred of decency, you should opt for something—anything else. It’s slow, unstable, and not particularly efficient. It makes walking feel more comfortable. Yet dammit, I loved every single minute chugging along in this old-school off-roader. This, I think, is the closest thing I’ll ever get to driving a Land Rover Defender and for what? Chump change.

When other car companies rushed to create ever softening soft-roaders, Suzuki has done the opposite and Frankensteined a small SUV that’s perfect both as a farmer’s tool and bouncy boulevard cruiser. The two main ingredients in this voodoo mix are the ladder frame chassis and dual ratio transfer case. And though I didn’t exactly go mud crawling in it, hardcore off-roaders swear by it. I mean, the spec sheet reads like a wet dream: ground clearance is 190 mm, approach angle is 34 degrees, breakover angle is 31 degrees, and departure angle is 46 degrees—and that’s good enough for me. Plus, I did drive it full speed over the truck lane on C5 and you know what? It happily handles this sort of terrain well. Sure, the front and rear solid axles jiggles the occupants like a mad fat-vibrating machine, but it rides here better than it does on smooth tarmac. That’s not to say it feels solid though. On the contrary, it feels like the cabin has the rigidity of Jell-O bolted onto a stiff Arnold Schwarzenegger-like chassis.

While I loved terminating potholes, the recirculating ball steering system does take some getting used to. I find it handles like a larger car; like a pickup truck from a bygone area (it actually brakes like one too). Massive amounts of turns are needed to negotiate a simple U-Turn. Thankfully, the diminutive body makes it slot into spaces which would otherwise panic the hell out of larger cars. The midget dimensions also help with the sideway swinging tailgate which when fully opened takes about the same amount of space as a typical compact crossover. Climbing aboard requires a good step up and once aboard, the seats are, I find, mounted high. It’s so high that I could see the entire length of the hood, so positioning it with millimeter precision proves easy. In fact, visibility is a strong point of the Jimny though the thick B-pillar does mean a terrible blind spot around to the side (good luck having to negotiate with bicycles and motorcycles).

With a 1.3-liter engine with 81 horses and 110 Nm of torque, it sounds crazy to attempt a long distance drive in this car, but that’s exactly what I did. The result, therefore, isn’t surprising. If you’re into sort of that thing, the Jimny gives a good arm workout. It requires constant correction and can be tiring to drive on the relative smooth pavement of SLEX. Plus, once the speedometer needle goes past 80 km/h, the front tires start to lose what remains of its limited feedback. Playing Grand Turismo using a steering wheel has more feedback. Drivetrain refinement is also pretty much how you’d expect an 18-year old car to feel like: noisy, wheezy, and underpowered.

But instead of hating it, I love wringing it. The engine isn’t particularly rev happy and is pretty asthmatic, but the short gearing does contribute a lot to its fun character. I thank the easy-to-modulate clutch and decent gearbox (long throws though) for this. You’ll actually need to constantly shift gears just to maintain a good pace. Take note though that 100 km/h arrives at a high 3,600 rpm and this heavily penalizes the fuel economy: 14.52 km/L on the highway. It’s also not much better in traffic: 7.01 km/L in heavy (average speed 11 km/h) and 9.05 km/L in light traffic (average speed 18 km/h).

The biggest draw for me is the Jimny’s cutesy exterior. Like a typical Asian, it’s managing to look younger than its age. There has been some work done on its nose, but it’s actually withstanding the ravages of time quite well. That being said, I’m no fan of the faux hood scoop—it’s just out of character on this no-frills micro SUV.

Sadly, the fountain of youth formula only seems to work outside. Inside, it belongs in the same era as the Backstreet Boys. Plain and hard plastics, dated ergonomics, lack of even the most basic safety equipment, no multimedia inputs (even a token aux-in jack)—they are all part of the cabin experience. Again, Suzuki has worked to modernize some touch points (the gauges for one), but overall it’s 18 years old and it shows.

In terms of space, the front passengers won’t feel shortchanged thanks to the large, upright greenhouse and surprisingly supportive seats. However, those in the back would probably feel better if they had no legs, first. Decent rear legroom is only achieved when the front passengers agree to compromise. Otherwise, it’s best reserved for knick-knacks such as handbags. And speaking about luggage space, with the rear seats up, there’s not much to go by: 113 liters. It does grow to 324 liters with the rear seats, but that’s still not a lot. Some flexibility is offered by the 50/50 split-folding seats.

The Suzuki Jimny isn’t for everyone. It isn’t for those who drive on flat pavement all the time. It’s not for those who value practicality. It’s not for those who want the latest and most technologically advanced thing out there. It’s for a super select group of people who’re looking for something with a bit of character. I really cannot see the practicality of owning one as a daily driver, but I understand the appeal of the Jimny. Dare I say it, it’ll likely appeal to the same bunch of people who swear by Land Rover Defenders. And that’s saying a lot.