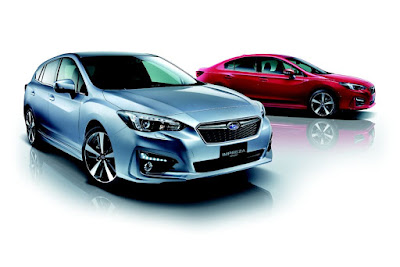 The Japanese press has spoken and they have awarded the 2017 Subaru Impreza as their 2016-2017 Car of the Year. With a juror composed of 59 members of the press, the Impreza becomes only the second Subaru model bestowed with the title (the Subaru Legacy being the first in 2003).

The Impreza’s win is surprising to say the least since it beat out the favorite: the all-new Prius by 49 votes (the Impreza had 420 votes). The all-new Audi A4 had 149 votes and won the Import Car of the Year followed closely by the all-new Volvo XC90.

Passenger cars officially announced or launched in Japan between November 1, 2015, and October 31, 2016, with projected sales of at least 500 units are eligible to be awarded Car of the Year. In addition to the Car of the Year Japan and Import Car of the Year prizes, awards are granted only in three other categories: Innovation, Emotional, and Smart Mobility. 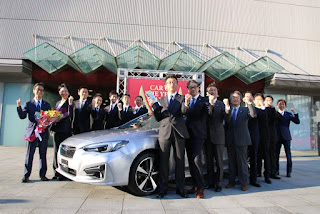 Developed at a cost of around US$ 1 billion, the all-new Impreza is the first vehicle underpinned by the Subaru Global Platform. Aiming to offer driver “enjoyment and peace of mind”, the Subaru Global Platform is designed to provide improved driving dynamics and quality. It also has better all-around safety which Subaru says will enable their vehicles to be segment leaders in terms of safety at least until 2025.

“It is a great honor that the Impreza has been recognized with this distinctive award,” said Yasuyuki Yoshinaga, President and CEO of Fuji Heavy Industries (FHI), the parent company of Subaru. “I would like to thank our customers, suppliers, and shareholders for their continued support for Subaru and I am grateful to all those who contributed to this achievement. We will continue to enhance our efforts to offer an ‘enjoyment and peace of mind’ driving experience to all customers.”

Since its launch in Japan, the all-new Impreza has had very strong sales, beating company estimates fourfold (it sells more than 11,050 units per month). And according to Subaru, 51 percent of Impreza buyers are new to the brand. This means it’s successful in attracting an ever-wider range of customers.

In the Philippines, the all-new Subaru Impreza is expected to be launched at the Manila International Auto Show (MIAS) 2017 in April.
at 12:11 PM