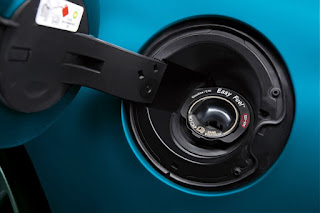 Filipino drivers say they are confident on the road and knowledgeable about what constitutes ‘good driving’, but when asked to identify key fuel-saving driving techniques, most were misinformed.

In a recent survey conducted by Ford Motor Company, 783 Filipino drivers were asked about their driving habits and fuel efficiency knowledge.

Ninety-four percent claimed they knew how to drive their car for maximum fuel efficiency, and 98 percent said they make a concerted effort to drive efficiently on a daily basis.

“When it comes to fuel efficiency, unfortunately there’s a yawning gap between what most of us think we know, and what we actually know,” said Kevin Tallio, Chief Engineer, Engine Engineering, Ford Asia Pacific. “For example, our survey showed that most people haven’t thought about the potential fuel saving benefits of using GPS or cruise control.”

So,what did Filipino drivers get wrong about driving tips that could help keep their tanks fuller, for longer?

Habit #1: 34 percent of Filipino drivers don’t know that harsh accelerating and braking negatively affect their car’s fuel consumption. Fact: Aggressive driving – like braking harshly or taking off too quickly – is a major offender when it comes to wasting fuel.

Habit #2: Almost one in five Filipino drivers believe that keeping the engine running while idling will save more fuel. Fact: Turning the engine off and restarting it again is actually more fuel efficient. If your vehicle features idling start/stop or auto start stop technology, you’re one step ahead.

Habit #3: 84 percent of drivers are unaware about the fuel efficiency benefits of cruise control. Fact: Cruise control is a modern car’s secret weapon against wasting fuel. Maintaining a constant speed means you don’t waste fuel by unnecessarily braking and accelerating – and it also stops you from driving faster than allowed.

Habit #4: Only 27 percent know to use GPS to map the quickest route before heading out. Fact: It seems obvious, but the longer you drive, the more fuel you’ll use. Both time and money can be saved  by checking your route on your GPS system before you hit the road. You can use smartphone-based systems like Waze or Google Maps.

Habit #5: More than half (57 percent) did not know that driving in hilly areas can affect fuel consumption. Fact: A long drive in the mountains will use more fuel than driving on a flat, straight road. Driving uphill uses more fuel as the vehicle is working slightly harder to go against gravity.

Habit #6: Many respondents were unaware that cold weather (82 percent) and hot weather (58 percent) affect a vehicle’s fuel efficiency. Fact: Cold weather can reduce your fuel economy significantly as it takes longer for your engine to reach its most efficient temperature, so you may want to rethink any short trips in cold conditions. In warmer weather, pay attention to how and when you use your air conditioner. For example, when the weather is not too hot, you can drive with your windows down at low speeds. Avoid leaving the the air conditioner at full blast always. Adjust fan and thermostat to a setting that is just comfy enough.


Habit #7: Only 37 percent of those surveyed knew that removing heavy items or clutter from the car can help save fuel  Fact: Excess weight in the vehicle can wreak havoc on your car’s fuel consumption. Any extra 20 kilograms you carry can reduce fuel economy by roughly one percent. So try to pack lightly on that next road trip.

Habit #8: 85 percent were unaware that adding sports tires or body kits to the vehicle can affect its fuel efficiency. Fact: Going for that “fast and furious” look for your vehicle may get you street cred, but the increased rolling resistance and drag will reduce your fuel efficiency.

While Filipino drivers are showing more interest in purchasing fuel efficient vehicles to save them money, the best way to economize on fuel is good driving habits (and that’s for free!)
“Owning a fuel efficient vehicle is definitely an important piece of the puzzle,” says Tallio, who worked on the development of Ford’s award-winning 1.0-liter EcoBoost engine. “But if getting great mileage is your aim, then driving habits make a world of difference.” 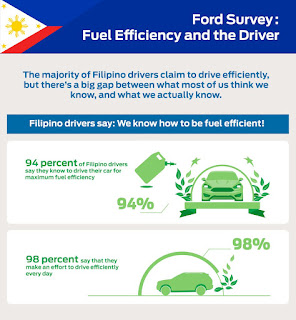 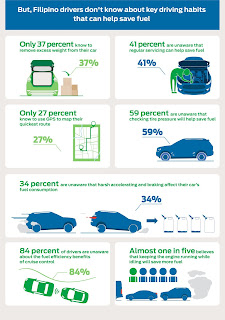 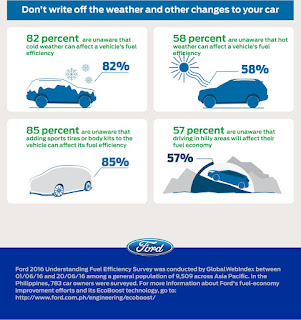