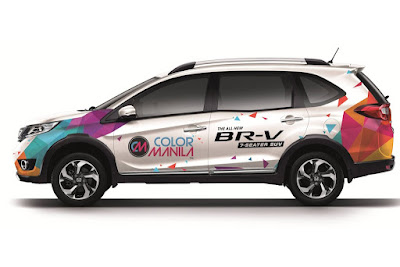 Honda Cars Philippines is joining one of the biggest fun runs in the country. A specially-decked out BR-V shows the carmaker’s support for the upcoming Color Manila Run happening on January 8, 2017 at the SM Mall of Asia Grounds. And to help you with your New Year’s Resolution to lose the holiday weight, Honda is giving away complimentary race kits via an online contest.

All entries should include the hashtags: #ILoveColorManila #CMR5 #HondaBRV #RiseAboveYourLimits, for it to be considered as an official entry. Only entries posted from today to January 13, 2017 will be honored to be part of this competition.

Noticing the fine print, not all entries will actually be part of the Color Run Manila fun run.