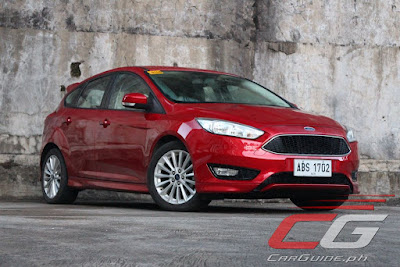 When it comes to crowning the Philippines’s sportiest compact out there, there are two cars that always seem to roll off the tongue: the Honda Civic and the Mazda3. And you can’t blame the masses: one touts a turbocharged engine and the other has driving excitement written all over it. But what if I tell you there’s a compact car in the market that’s often overlooked, but still offers a huge chunk of that driving excitement virtue? Heck, it’s even got a turbocharged engine with more power and torque than the Civic’s. Meet the Ford Focus once more.

The last time I was in the driver’s seat of the Focus, it was with the fully-loaded 4-door Titanium+ during APEC week. Then, the snarling traffic jams and resulting single digit average speed didn’t do the fuel efficiency any justice, so I took it upon myself to give the Focus a shot at redemption and that’s where we are today. Now, what I got isn’t the same Titanium+ model from a year or so ago; it’s not even the Sport+ hatchback I’ve been wanting to get my dirty mitts on for so long. This here is the entry-level Sport hatchback.

Despite an initial feeling of disappointment, as the Candy Red unit arrived, I thought: this isn’t so bad. Compared to other entry-level models which are stripped down, the Focus Sport still looks pretty complete. Credit that to the same exterior specs in all but the alloy wheels. At 17 inches, it’s a size down from the Sport+’s, but in the greater scheme of things, it doesn’t really matter. Remember, the Civic RS rolls on 17s too and hardly anyone complains. This entry-level hatchback also loses the daytime running lights, but considering that all Focus models don’t have HIDs or LEDs, it’s no big deal.

It’s inside where the P 130,000 price difference between the Sport and Sport+ makes itself quite apparent. Anything you see or read about in the Focus’s marketing material, be it billboards or brochures, isn’t in the Sport: powered driver’s seat, automatic headlights, rain-sensing wipers, dual zone climate control, SYNC 2—all missing in action. The Sport doesn’t even have the fancy Active Park Assist or Active City Stop. Yet, for all that missing stuff, it doesn’t feel empty at all. Credit that to the choice of materials and the exemplary fit and finish. Soft touch plastics on the dashboard, tactile switchgear, leather on the thrones—it’s a solid effort. Plus, I’ve never really warmed up to the touchscreen quadrant interface of SYNC 2, so having the multitude of physical buttons and the crisp, clear (albeit small 4.2-inch) screen feels much better.

The Focus is always called out for its tight interior and it’s the same situation here. Whether it’s space for people or stuff, it’s at a premium. The seats are generally supportive front or back, but the rear occupants will rally against the lack of knee room. And even if the front occupants are willing to give up a bit of their legroom, it’s not going to add much back there. Plus, there are only two headrests at the back; it’s as if Ford’s already giving up the idea of putting a third person back there. It’s the same case when trying to find space for smartphones, loose change, drinks, and what have you. The front cup holders and its movable partition is a great idea in principle, but it’ll struggle to even fit a short-sized Starbucks latte and a 5.5-inch phone in the same receptacle.

On the road, not much separates this entry-level Focus with the top-of-the-line one and that makes it the segment’s most unappreciated gem. Compared to other compact cars which tend to gravitate either towards handling or comfort, the Focus offers both. It’s impeccably balanced; offering a nicely ironed ride over Manila’s pothole ridden roads, while managing good and progressive body movements when hitting mountainous switchbacks. Now, if there’s any letdown, it’s the steering. Though it fulfills the layman’s definition of sporty handling, for enthusiasts, the feel is just off. The lightened steering effort coupled with noticeable sensitivity around the center does make the Focus feel quick, but the same system also makes it far more tiring to drive long distances. I actually had aching wrists after a round trip drive from Manila to Tagaytay, so I can’t imagine what a Manila to Baguio trip would feel like.

Steering aside, there’s no arguing with the Focus’s best asset: the engine. At a smidge above a million pesos, plopping in a 180 horsepower, 240 Nm of torque engine makes this car a steal. While Honda has managed to hog all the attention with its Earth Dreams engine, Ford’s own EcoBoost is just as good. There’s some slight vibration at idle, but as it gets going, it becomes smooth, refined, and quiet. It’s some 0.4 seconds slower to the century mark compared to the Civic RS, but the Focus does feel like the faster car.

Credit that feeling of going fast to the Focus’s adoption of a conventional 6-speed automatic. Compared to Honda’s perk-sapping CVT, this traditional torque converter gearbox gives the satisfying feel of shifts that are actually organic and not artificial. There’s still a touch of jerkiness when coaxing a downshift, but for the most part, it’s great in maximizing the engine’s wider power band. Sadly, the Sport nixes the paddle shifters. At any time you want to shift gears yourself, you have to settle for the gear-lever mounted rocker switch.

Equally problematic is the Focus’s fuel economy. Honda has gone the CVT route to prop up the Civic RS’s efficiency figures and that strategy has worked. For all Ford’s talk about improving fuel efficiency, the Focus Sport drinks fuel at the rate of 6.25 km/L (average speed 12 km/h). This figure goes up slightly to 7.69 km/L as the traffic lightens up (average speed 17 km/h).

Although the Sport variant doesn’t offer any of the features that has made the Ford Focus a technological breakthrough in the compact car class, you shouldn’t care. Come to think of it, those features like Active Park Assist and Active City Stop are frivolous. Sure, they’re great in the brochure and in a sales pitch, but when do you exactly use them? By removing those electronic aids, the Focus’s often overlooked attributes begin to shine. It’s not perfect, but it’s still mighty fun, comfy, and fast. It looks good doing all that too. Above all though, the P 1,088,000 price tag makes it an unbeatable bargain.