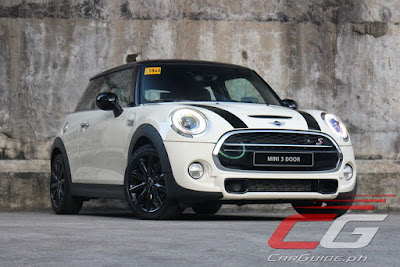 I’ve got some news for you: Ms. Cooper is all grown up. After being rebellious some 50 years ago and naughty 16 years before today, Ms. Cooper is ready to turn a new chapter in her life; she’s tired of hanging out with rock stars and rappers, and ready to put on a sharp suit on the way to the boardroom meeting. She’s all about mergers and acquisitions now. Or is she? Let me tell you a little secret: she’s still ready to have fun and get her pants off, you just need to know which buttons to press.

And that my friend, is the role of this toggle switch just below the gearlever called, “MINI Driving Modes”. Admittedly, the name does sound corporate but trust me: Ms. Cooper loves being fiddled with down there. She always defaults to “MID” at start-up (which requires toggling a different switch altogether) and that’s pretty much a good 80 percent of the time. But if you want that extra bit of excitement, that extra bit of raunchiness, switch her over to “SPORT”. I guarantee she’ll be a total blast to ride.

The whole MINI driving experience is set around a go-kart feel, and yes, it’s all there. It’s hard to put it into exact words, so thankfully the unashamed grin on my face tells it all. Squirt the throttle and I know she’s ready to skip the foreplay. She’ll scamper off, momentarily breaking traction from the front wheels before setting in and letting out a satisfying, un-ladylike roar. I could hear a bit of that turbo whirring in the background, but for the most part, it’s all her clever piping doing the work. She’s only got 192 horsepower and 280 Nm of torque under that chest, but in something that weighs just 1,250 kilograms, I tell you, she makes the most out of it. Zero to 100 km/h comes in just 6.7 seconds and add 3.4 seconds to that, and I’ll have to claim my license at the LTO Main Office.

Repeatedly doing these full throttle jabs never gets old, but thankfully, she knows more than that. In fact, it’s just the appetizer to her full repertoire of fantastic abilities. Her charm extends to the moment I take her into a corner, where she’ll attack it with immediacy. With no lack of communication from the steering or chassis, and limited only by her slight bias to understeer, she pivots quickly and is already deep into the bend by the time the front pillar reaches the apex. She’s also got tenacious levels of grip and satisfying levels of balance. The only problem is that she doesn’t know when to stop. The brakes don’t have a nice, solid bite into them; more pedal travel is needed to get her to slow down.

While there’s no questioning that Ms. Cooper is mighty addicting to take out for weekend rendezvous, she’s also pretty much a keeper; she’s much more civilized than before. This is certainly where all that “grown up” talk comes in. Compared to previous generations, my patience never ran out in terms of ride and comfort. Granted the short wheelbase and limited suspension travel does suck her into bumps I would otherwise glide over with bigger cars, at least there’s a certainly level of compliancy and absorbency that makes her much better in taking long commutes than ever before. Her aforementioned “MINI Driving Modes” also has a “GREEN” mode, which doesn’t add naughtiness but rather, neuters it altogether. It’s for the sake of Mother Earth, but her on/off throttle characteristics in this mode means she’s not all too happy being a tree hugger.

Now that I’ve pretty much settled the issue on how Ms. Cooper conducts herself on the road, I’ll have to touch on how she looks. Looking at her, she’s clearly an evolution of a design that dates back some 16 years with all the design cues intact: hexagonal grille, clamshell hood, floating roof, and upright windshield. Some have criticized the design to be fussy or swollen, comparing it an English bulldog even, but I find it distinctive and rather cute. Now, I don’t know if it’s my propensity to like dogs with a snubbed nose and an under bite (I have two pugs), but I dig it. This performance-oriented S adds even more go and look faster parts like a more aggressive bumper set, bigger wheels, and even a hood scoop. Heck, just this once, I’d even go for a wilder color palette than this subdued white-and-black scheme. This is a playful car after all.

Inside, Ms. Cooper is equal parts sensual and serious. Again, she’s trying to grow up, but a bit of that playfulness still seeps through. She certainly knows how to tease with her rounded bezels, switches, and knobs. She’s even got copious amounts of ambient lighting that can be made to adjust for any mood or even function (the central display ring can be made to change colors whenever the climate control, infotainment system, or vehicle settings are changed). The oft-criticized central speedo is now gone, replaced by a nice, crisp display for the infotainment system. It’s got a dizzying amount of functions, so caution is warranted whenever it’s operated during stop-and-go traffic. Meanwhile, the speedometer itself has moved to a more conventional location, but in typical MINI tradition, is stylized with funkiness.

Apart from being a great partner to interact with, she’s also much more adept at everyday life too. She still hates doing the groceries (trunk space is still limited to 211 liters), but at least she’s roomier. There’s greater shoulder room and more knee room in the front, all supplemented by the wonderful embrace of the diamond-quilted sport seats. Still, this party’s still limited to just two people as the back seats remain as small as ever.

Her boisterous charm mixed in with retro cool has been largely responsible for the MINI Cooper’s success of late. Sixteen years since its re-launch, another car more or less like the last one could have tired people and spelled an end to that widely successful formula. Thankfully, the 2016 MINI Cooper S mixes in something extra to her naughty and nice personality. That “something extra” is more pace, refinement, and maturity that crucially, doesn’t affect her “MINI-ness”. Yes, she’s grown up, but she knows how to have fun and at times, still acts like the excited teenager she always was.