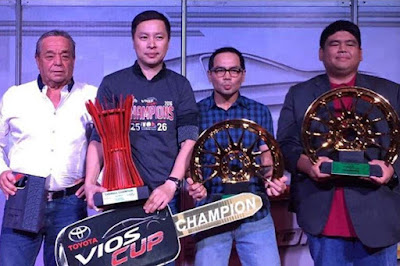 Uy was way off the list of top contenders for the coveted plum when his engine failed him, garnering no points during Race 5 and 6 of the disappointing Round 3 at the Clark International Speedway. Armed with a keen focus on details and strategy, and most of all, a big fighting heart, Uy staged a big comeback in the season finale also at the Clark International Speedway as he captured the crucial victory in Race 7 and finished seventh in Race 8 despite being ganged up by the top contenders.

Earning a total of 48 points in the final leg, Uy finally saw the light of glory, ending the season with a total of 111 points to clinch the Super Sporting Class title and eventually claim the overall plum of this event, powered by Bridgestone, ROTA, Motul, Toyota Racing Development Denso, AVT, Brembo, OMP, and TuasonRacing.com.

“It has been a rough but fruitful journey this season.  Being part of the Vios Cup ever since it started two years ago has been a humbling experience. Going through tough struggles made me stronger and rewarded me with nothing but the best this year,” said Uy.

Estefano Rivera (Toyota Alabang) emerged the overall first runner-up with 103 points while Basti Escalante of the Obengers saw his best season so far as he bagged the second runner-up title with 90 points. Dominic Ochoa (Toyota Quezon Avenue) wound up fourth overall with 83 points, and Daniel Miranda (Obengers) got fifth overall with 82 points.

Toyota Motor Philippines’ (TMP) very own President, Mr. Satoru Suzuki was elated about the outcome as he noted that “the Vios Cup Season 3 proved to be nothing short of the first two seasons and success is starting to be a tradition for TMP’s flagship program.”

In fact, the influx of new drivers and the emergence of more champion-caliber young drivers resulted to an even more phenomenal Vios Cup Season 3 as the level of competition stepped up, which created tougher rivalries, more drama, and more thrilling plots that preserved the unpredictability of the series to the very last lap.