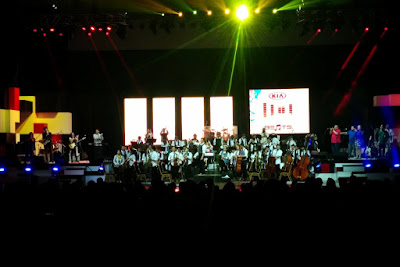 The Metro Manila Concert Orchestra (MMCO) was honored at the 29th Aliw Awards for their participation at Kia Beats. The country’s premiere orchestra won Best Major Concert (Group) and was also nominated for the Best Instrumentalists (Group) category.

The MMCO delivered sterling renditions of Filipino classics in their performances for Kia Beats such as Nonong Pedro’s Isang Mundo, Isang Awit, Kay Ganda ng Ating Musika by Ryan Cayabyab and a medley with Florante’s Handog as the centerpiece.

Performing alongside the MMCO that weekend were indie icons Ang Bandang Shirley, jazz-rockers Farewell Fair Weather, and electronic DJ and Drummer duo Motherbasss. Also featured was OPM hero Rico Blanco, who himself was nominated for an Aliw Award for Best Major Concert (Male) for his Kia Beats performance.

According to Cruz, “We are very happy to be able to add to the MMCO’s growing list of accomplishments. Credit to Kia Philippines and SK ZIC for providing us with the opportunity to perform for new audiences and challenging us as musicians by partnering us with the talented artists we shared the stage with that weekend.”

Ginia R. Domingo, President of Columbian Autocar Corporation (CAC), the exclusive distributor of Kia vehicles in the Philippines, expressed her delight at the company’s efforts to support Filipino music and artists being recognized by such an esteemed award giving body. She says, “We are incredibly proud to have been able to provide an opportunity for these groups to showcase their amazing talents. This recognition validates our efforts to highlight the incredible musical talents of Filipinos. This gives us inspiration to continue to support our talented local musicians through Kia Beats and give them a venue to exhibit their skills at the Kia Theatre.”

Kia Beats was a back-to-back concert performance which celebrated Filipino music past and present, as well as musical styles from classical to electronic in a one-of-a-kind collaborative performance between the new breed of OPM artists and one of the country’s most established orchestra ensembles. It was held last September at the Kia Theatre, a venue where Kia hopes to continue to showcase Filipino artists and allow them to demonstrate their musical talents.

The Aliw Awards, presented by the Aliw Awards Foundation,Inc. is the premier award giving body for live entertainment in the Philippines. The Foundation is a non-stock, non-profit private organization founded in 1976 by a group of newspersons created to give due recognition to entertainers who perform live in the Philippines and abroad.
at 1:59 PM