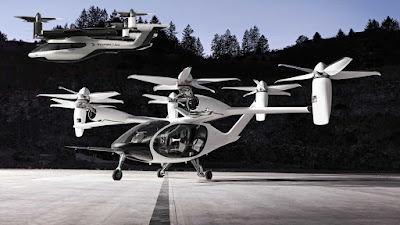 Toyota and Hyundai are in a race to make the world’s first commercially viable flying car. In two separate announcements, Hyundai partnered with Uber, while Toyota teamed up with Joby Aviation.

For Hyundai, they’re the first automotive company to join the Uber Elevate initiative bringing automotive-scale manufacturing capability, and a track record of mass-producing electric vehicles to jump start the development of flying air taxis. Created through Uber’s open design process, Hyundai will be releasing the vehicle design concepts publicly so any company (China joined the chat group) can use them to make their own air taxi model.

Under this partnership, Hyundai will produce and deploy the air taxis while Uber will provide air support services as well as ground transportation.

Hyundai’s first Personal Air Vehicle (PAV), the S-A1 is an electric vertical take-off and landing (eVTOL) aircraft that can cruise up to 290 km/h at an altitude of 1,000 to 2,000 feet. Its cruising range is estimated to be around 100 kilometers. Recharging requires just 5 to 7 minutes and will be able to fit 4 passengers.

Meanwhile, Toyota is developing its own eVTOL aircraft, and for this they’ve invested in Joby Aviation. Apart from investing USD 394 million (~ P 19.9 billion) into the company, Toyota will share its expertise in manufacturing, quality, and cost controls for the development and production.

The design is said to match the needs of an emerging air transportation market where commuters and travelers embrace the benefits of aviation on a daily basis within and between urban centers. More details of the prototype aircraft and production plans will be announced at a later date.
at 9:28 AM